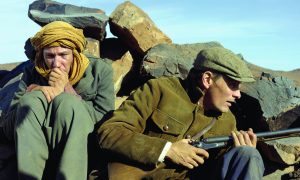 Film Review: ‘I Am Chris Farley’

For reasons of girth, Chris Farley was often compared to his hero John Belushi when he joined the cast of “Saturday Night Live.” Perhaps for the same reason, we too readily accepted his tragic early demise. As iconic as Belushi might be, Farley had a good-hearted Chaplinesque appeal that none of his contemporaries could match. Viewers get a sense of how genuine his aw-shucks persona really was in Brent Hodge & Derik Murray’s documentary, “I Am Chris Farley.”

Farley grew up in a loud, loving family in Wisconsin, with a garrulous father much like Brian Dennehy’s character in “Tommy Boy” (a much more autobiographical film than casual fans may have realized). For a while, Farley was a reasonably successful salesman for his dad’s company, but a chance encounter with semi-professional theater changed the trajectory of his life. His stints in regional theater led to a residency with Chicago’s famous Second City Theatre improvisational comedy troupe, which at the time was practically the farm team for “Saturday Night Live” (SNL) (a sketch comedy show that once aired on NBC after the Saturday night local news—and who knows, maybe it still does, but nobody has seen it since 2004).

Logically, Hodge, Murray, and screenwriter Steve Burgess devote the lion’s share of the film to his SNL period (1990-1995). That is what people will be most interested in—and sadly, Farley would tragically die soon after in late 1997. Arguably, Matt Foley, the motivational speaker with unfortunate living arrangements, represents the last truly classic SNL skit. As written, the humor of the situation is quite funny, but Farley’s efforts to break-up his buddy David Spade and guest host Christina Applegate made it legendary. Yet, the best part of the story comes when “I Am Chris Farley” identifies who the real Matt Foley is, because it reveals so much about Farley.

Hodge & Murray paint a comprehensive portrait of Farley as a devout Catholic and a devoted friend and brother.

Indeed, Hodge & Murray paint a comprehensive portrait of Farley as a devout Catholic and a devoted friend and brother. Fortunately, they secured the Farley family’s participation, because his brothers’ reminiscences really help fill out the picture of someone so easy to caricature. They also scored sit-down on-cameras with many of Farley’s famous friends and colleagues, including Spade, Adam Sandler, Jon Lovitz, Jay Mohr, Bo Derek (who still looks fantastic), and Dan Aykroyd.

“I Am Chris Farley”  hits theaters shortly after the release of Bao Nguyen’s SNL doc “Saturday Night,” but it is by far the superior film. One could say the Farley profile is one hundred times better than the shallow, smugly self-congratulatory, slavishly PC bore that quickly exited theaters, but that would still unfairly imply it is a bad film. In fact, “I Am Chris Farley” is quite a good film, because it is so surprisingly endearing. Basically, it gets right everything that “Saturday Night” gets wrong.