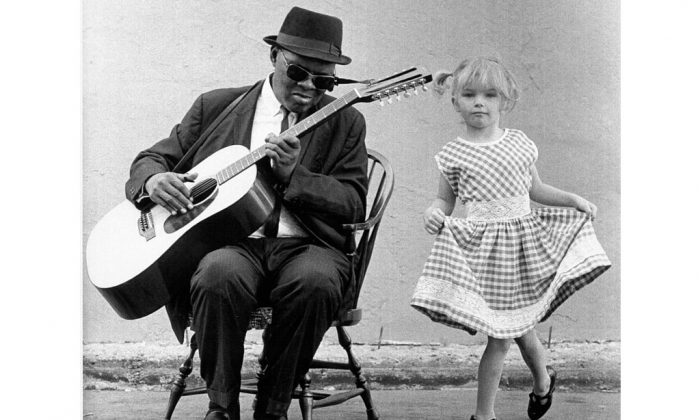 Gary Davis with a dancing girl in “Harlem Street Singer,” a documentary about the blues teacher. (Alice Ochs/Getty Images)
Entertainment

The little-known story of a bluesman
By Joe Bendel

Reverend Gary Davis was a man of God, but his finger-picking attack sure was fierce. Eventually embraced by the Blues Revival, the Reverend Davis had spent years performing on the streets of Harlem. He also took on students, including future neo-roots artists like David Bromberg and Stefan Grossman.

Davis’s loyal students and admirers piece together his story and trace his elusive influence in Trevor Laurence and Simeon Hutner’s “Harlem Street Singer.”

Davis was a real-deal bluesman from North Carolina, who recorded some real-deal blues sides before dedicating himself to songs of praise and worship. They were still drenched in the blues, making him rather tricky to classify.

A modest man with an idiosyncratic teaching style, Davis accepted any student bold enough to sign up with him. In addition to Bromberg and Grossman (who discuss their teacher throughout the documentary), Davis also provided musical instruction to Roy Book Binder, Dave Van Ronk, and Woody Mann, who also serves as the film’s musical director and co-producer.

Davis was legally blind since birth, grew up in the Jim Crow-era South, and lived most of his life in poverty, yet “HSS” is a defiantly upbeat movie. According to those who knew him, Davis just played his music and preached the Word (indeed, the two were always closely related), regardless of his circumstances.

Of course, there is a lot of music in the film and it is consistently great. Laurence and Hutner scored a coup with the inclusion of previously unseen footage of Davis laying it down at the Newport Folk Festival, and they do not keep viewers waiting for it, using it to kick off the film with a big statement.

Keeping the apostolic flame burning, Mann leads a tribute ensemble that periodically plays some dynamite Davis covers. Mann and Bill Sims Jr. have the unenviable role of handling the guitar and vocal duties, respectively, but they both sound fantastic, getting first-rate support from Dave Keyes on piano and Brian Glassman on bass. It is a killer quartet that ought to get a ton of gigs together if “HSS” receives the attention it deserves.

Few docs are as wildly entertaining as “HSS,” but it still does justice to the seriousness of Davis’s life and times. Hopefully, someone from PBS has it on the radar, because it is as good as anything that has been on American Masters since “Cachao: Uno Mas” and is considerably better than most.