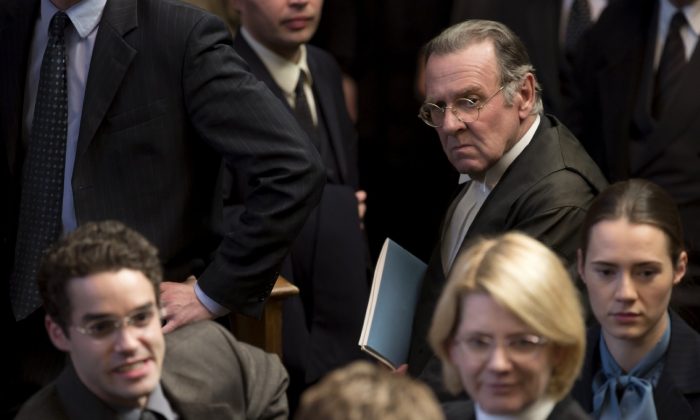 Thanks to New York State’s wise libel tourism laws, reviewers of this film can refer to “historian” David Irving as a holocaust denier secure in the knowledge New York courts will not honor any foreign libel judgments against them deemed inconsistent with our own First Amendment rights.

One would think the ugly spectacle of Irving suing American historian Deborah Lipstadt, forcing her to prove the Holocaust happened would have created a groundswell for libel law reform, but alas, it did not. The high stakes court case gets the big screen treatment in Mick Jackson’s “Denial.”

Irving was once a semi-credible historian, who garnered some favorable blurbs before crossing over to the dark side. By the time Lipstadt’s book “Denying the Holocaust” was published, he was a fringe figure, but he still had a knack for garnering media attention. In a potentially devastating act of libel tourism, Irving sued Lipstadt’s British publisher, Penguin UK, in British courts.

‘Denial’ is at its best when it really digs into the blow-by-blow details of the trial.

In an American court, Irving would have to prove Lipstadt’s words were both defamatory and the product of demonstrable malice, but in Britain, Lipstadt would have to prove they were justifiable. As a result, Penguin’s legal team, notably including barrister Richard Rampton QC and solicitor Anthony Julius (in/famous for representing Princess Diana), had the responsibility of proving the Holocaust really happened and Irving knowingly and deliberately twisted the historical evidence to the contrary.

Mindful of the David-and-Goliath symbolism, Irving opted to represent himself in court. Again, due to the perversities of the British system, this also gave him some advantages over as Lipstadt as one of the opposing counsel. Still, the old “fool for a client” adage hasn’t remained this long in circulation for no reason.

“Denial” is at its best when it really digs into the blow-by-blow details of the trial. Rather logically, all of the litigious Irving’s dialogue in these scenes is adapted verbatim from the transcript. Watching the crafty Rampton lure the over-confident Irving into various logical-historical traps is gripping stuff.

Unfortunately, Lipstadt’s overwrought outrage almost becomes insufferable. She is an accomplished academic, but Rachel Weiss plays her like a shticky Queens caricature incapable of controlling her emotions or her mouth.

When Weiss shuts up, Tom Wilkinson carries the day, portraying Rampton with all his customary panache and gravitas—and then some. He exudes the intelligence and charisma of a barrister you would want to be represented by.

Similarly, as the Holocaust denier, Timothy Spall is aptly wily and sinister, in a tweedy British sort of way.

Frustratingly, the terrific Irish character actor Andrew Scott (Jim Moriarty in the Cumberbatch “Sherlock”) does not have much to do as Julius except trying to rein in Lipstadt.

When it is smart, “Denial” is an intense and insightful film. When it is emotional, it gets a bit dumb, which goes to show the principles for success are not that much different for film than they are in the courtroom.