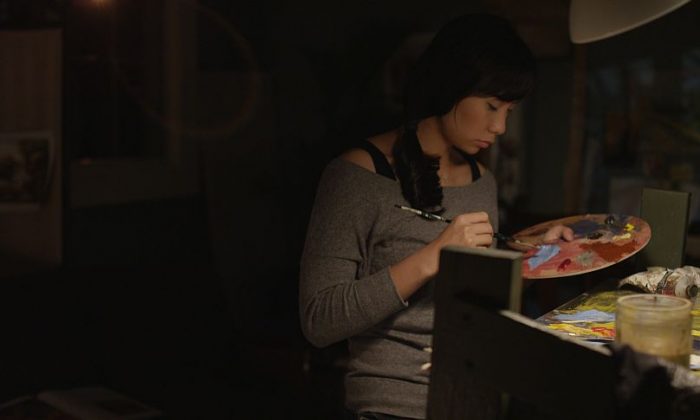 Art and action in Seattle
By Joe Bendel

These siblings do the sort of jobs native-born Americans just won’t do, like forging a Van Gogh and boxing in unregulated after-hours bouts. To be fair, she is highly conflicted about the former, whereas he faces plenty of home-grown talent in the latter. Their legal status is precarious, but their spirit is indomitable in Livi Zheng’s “Brush with Danger.”

Alice and Ken Qiang were two of the lucky ones, who survived their cargo container transit to America. They came in search of a better life, but they also had to get out of Dodge fast. They have practically nothing to their names, except for some of her paintings that they will try to sell on the streets. They also have skills, which is part of the reason why they had to leave in a hurry.

Yet, despite Alice’s reluctance, the Qiangs discover they can quickly fill a hat with their street displays of martial arts and acrobatics. Gallerist Justus Sullivan also notices them doing their act, but it is Alice’s work that really catches his eye.

Playing the role of patron, Sullivan moves the Qiangs into his McMansion so Alice can finally live up to her potential. To keep Ken busy, Sullivan introduces the impetuous kid to his associate running Seattle’s underground fight circuit. Soon Ken is earning his own illegal spending money, fair and square.

“Brush” is the directorial debut of Livi Zheng, an Indonesian-born former stuntwoman and NCAA Karate competitor. It does indeed have some of the roughness you might associate with first features, but she and her real-life kick-boxer brother Ken are totally convincing in the action scenes. In spite of some narrative slack, Zheng keeps it well paced and Norman Newkirk adds some memorable villainous charm as Sullivan.

Frankly, the problem is that it is all too nice. The Zhengs are hugely likeably rooting interests, and former cop-turned-wrestler Nikita Breznikov is rather likable as Detective Thompson, in a doofus kind of way. Even Sullivan is kind of nice (although some of his angry associates are definitely not). Still, if you had to choose a movie bad guy to have lunch with, he should be at the top of the list.

So if everyone is nice, does that mean the movie is nice too? Unfortunately, that probably constitutes a fallacy of composition. Regardless, it is impossible to root against the Qiangs or the Zhengs, who are already at work on their next action picture. If they maintain their earnestness and add some narrative edge, they could really get somewhere. For now, “Brush with Danger” opens Friday, Sept. 26, in New York at the Cinema Village.