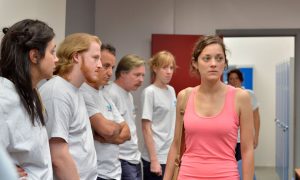 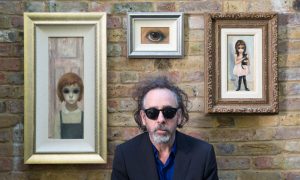 It should have been a routine, but highly profitable salvage job. Thanks to Russian military adventurism in Georgia and Crimea, Ukraine, the whole rights and permissions thing is now considerably trickier. As a result, a disgruntled submarine captain will lead an off-the-books mission in Kevin Macdonald’s “Black Sea.”

Capt. Robinson has just been down-sized (or as the city of Detroit says, “right-sized”) by his buttoned-down corporate marine salvage firm. Finding little work for a disgruntled submarine skipper, Robinson is up for a caper and one of his former colleagues has one.

It turns out, while the Molotov-Ribbentrop Pact was still observed by both sides, Stalin agreed to loan Hitler millions in gold (as one socialist to another). However, the German U-boat carrying it home was sunk and Germany invaded Russia shortly thereafter. For decades, it lay forgotten at the bottom of the Black Sea. Eventually, the company struck a deal with the Georgian government to salvage it, but the operation was put on hold when the Russians starting paddling around like they owned the place.

Acquiring an old Russian sub resembling a barnacle with a periscope, Robinson’s team heads out to sea, but tensions quickly rise.

With the help of a mysterious funder, Robinson will recruit a crew to sneak down there and get it. To make things unnecessarily complicated, half the crew must be Russian—presumably so they can talk to any Russian torpedoes that might be launched at them.

Acquiring an old Russian sub resembling a barnacle with a periscope, Robinson’s team heads out to sea, but tensions quickly rise. Daniels, the transparently villainous financial go-between, is particularly alarmed when Robinson announces that each man gets an equal share once their backer gets his 40 percent. Wouldn’t they be tempted to bump each other off to get a bigger slice of the pie? Still, you might think they would need a minimum contingent of crewmembers to keep the sub seaworthy. It turns out that number is nine.

Frustratingly, “Black Sea” has a very intriguing backstory, but screenwriter Dennis Kelly jettisons it almost immediately. (Nevertheless, the new reels playing underneath the opening credits make it look like Stalin will be played by Ben Mendelsohn.) Instead, he channels B. Traven, cranking up the class warfare and seafaring naturalism. “Treasure of the Sierra Madre” is a worthy film to emulate, but he leaves way too many holes in the narrative.

Mendelsohn’s Fraser, the diving specialist, is a case in point. Half the time he is a reckless psychopath, but he serves as the ostensive voice of reason nearly just as often. Similarly, if he were really primarily concerned with saving his own skin, would he really let loose a bunch of mutinous chaos while they are navigating a shallow canyon? That just seems like needlessly perverse timing.

It is a shame Kelly’s narrative clunks and clangs along, because Jude Law is terrific as the salty Robinson. It is rather remarkable how convincingly he shows Robinson’s class resentments metastasizing into paranoid psychosis, nearly deconstructing the entire film in the process.

Even though his character makes no sense, Mendelsohn is always enjoyable to watch chewing the scenery, as is Ben Wheatley regular Michael Smiley, who is reliably flinty and acerbic as Robinson’s crony, Reynolds. However, fans of Jodie Whittaker should not expect much, because she only fleetingly appears in flashbacks as Robinson’s ex-wife.

Partially shot on a vintage 1967 Foxtrot Soviet sub (one of only four such surviving vessels), “Black Sea” looks great and feels appropriately claustrophobic. Unfortunately, the narrative repeatedly undercuts everyone’s best efforts. There is just a little too much message-making and not enough attention to action details. An ambitious disappointment, “Black Sea” opens Jan. 23 in New York.