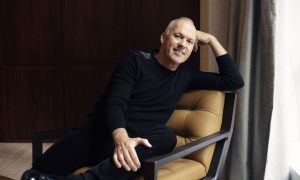 When we first see Michael Keaton in “Birdman,” Alejandro G. Inarritu’s bracingly inventive and accomplished new film about fame, relevance, self-worth, and lots of other intense stuff, he’s sitting in his white undies, in the middle of a dressing room.

No, really in the middle. Like, in the air. He’s levitating.

Of course you think, “How’d he DO that?” Turns out that’s an apt metaphor, intentional or not, for Inarritu’s entire achievement here. Fast-forward to film’s end, and we’ll bet the very same words will be on your lips: “How’d they DO that?”

Still, it’s best not to spend too much time thinking about the technical virtuosity of “Birdman,” most importantly how it creates the impression, thanks to master cinematographer Emmanuel Lubezki, that it’s all one continuous shot. Remember Lubezki’s 13-minute opening in “Gravity”? Merely an appetizer, it turns out. But the best thing about his work here is that it serves the narrative so well, you hardly notice.

Keaton, in a wonderfully raw, dark, and vulnerable performance, plays aging actor Riggan Thomson, who earned fame and wealth decades ago playing a superhero, Birdman. His fans want more; he’s moved on. (Any parallels here with Keaton, star of two “Batman” films a quarter-century ago, are purely intentional.)

In a bid to restore his sense of self-worth, and perhaps to exorcise the demon of Birdman—a tall order, since, uh, the superhero still regularly speaks to him in his head—Riggan’s putting on a show.

It’s a Broadway adaptation of a Raymond Carver tale, which Riggan himself has written, is starring in, and directing. Your basic movie-star vanity project, only you get the sense Riggan’s very life—or at least his sanity—depends on it.

The fodder for industry jokes is endless. When a key actor is suddenly incapacitated, Riggan ponders possible replacements with his friend and attorney, Jake (Zach Galifianakis, exercising admirable comic restraint). Woody Harrelson? He’s doing the next “Hunger Games.” Robert Downey Jr.? Nah, “Avengers.” That other guy? He’s doing the prequel to the prequel.

Luck strikes like a thunderbolt when Mike Shiner (Edward Norton, superb) shows up to read for the part. Mike may be an entitled jerk, but he’s a bankable star. The scenes between Keaton and Norton as they rehearse, compete, and occasionally brawl like testosterone-fueled youngsters are simply dynamite, two actors firing on all cylinders.

Then there’s Sam, Riggan’s daughter, fresh from rehab and working as Dad’s assistant. It’s fun to see Emma Stone play a more troubled, unstable character here; her eyeliner-rimmed eyes seem to contain both love and loathing for her father. Making things even more precarious, Sam’s embarking on a dangerous flirtation with Mike, who’s ostensibly the boyfriend of co-star Lesley (an excellent Naomi Watts).

The movie was filmed almost entirely inside Broadway’s St. James Theater, giving all these relationships an extremely claustrophobic feel, as must happen in real life with a theater company. (We also get a fascinating inside view of how a Broadway show operates.)

Looming over everything is opening night, when one particular theater critic will, with the strike of a pen, make or break the show: the acid-tongued Tabitha (Lindsay Duncan), who despises Riggan and his movie-star ilk for polluting the theater. “I will destroy your play,” she hisses to him, acknowledging that she doesn’t even plan to see it first. Not to overly defend critics, but let’s just say that this melodramatic plotline feels like a rare false note in the script.

Other flaws: Watts’s character seems to drop prematurely from view, as do some tantalizing relationships that we really wanted to know more about.

But there’s so much that IS there. “Birdman,” more than most, seems a film that deserves a second viewing, not only to admire the work of Keaton and his co-stars, but also to delve into its many layers. And perhaps to pursue an answer to that question: “How’d they DO that?”