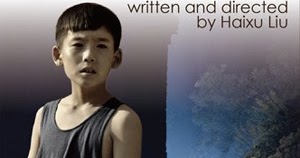 Film Review: ‘Beyond the Curtain’ (short)

Even though Chinese opera has a long tradition, all but eight so-called “model operas” were banned during the Cultural Revolution. Not surprisingly, comic books faced a similar, but possibly more stringent prohibition. Yet, a mysterious man will spark a young boy’s interest in both, despite the oppressive conditions mandated by the Gang of Four, in Haixu Liu’s short film “Beyond the Curtain,” which screens during this year’s Winter Film Awards.

Hai’s family has relocated to the provinces, but they have largely been spared the worst of the Cultural Revolution. They certainly seem to be sufficiently poor, since Hai lacks even the simple toys enjoyed by his classmates. One day, a mysterious homeless man starts to take an interest in the boy, giving him a few modest gifts, including a series of hand-drawn comic books that begins the narrative of a dark and stormy operatic tale of courtly intrigue.

‘Behind the Curtain’ really is bittersweet in the fullest sense of the word.

With tragic inevitability, Hai’s comics are discovered. Consequently, his parents and local cadres force him to denounce the homeless man. Although the resulting guilt and shame will haunt Hai all his life, he will not understand the full significance of his forced betrayal until he visits that same provincial village decades later, returning as a successful opera director.

“Curtain” really is bittersweet in the fullest sense of the word. While the pain from the Cultural Revolution lingers, the inspiration stoked by the mysterious vagabond also has a lasting, edifying effect. Somehow, Liu tightly bundles up every conceivable emotional response in his potent happy-sad pay-off, getting key assists from his small but talented ensemble. As young Hai, Zhiwen Zhang is arrestingly open and earnest, while Xianli Meng is hauntingly dignified and sad as the homeless man.

Liu also has an impressive eye for visual composition. He dramatically contrasts the drabness of life during the Cultural Revolution with the lush, stylized sets of the opera unfolding in Hai’s comic books. Arguably, “Curtain” is more cinematic than most full length features. In fact, Liu fits plenty of character development into its 27-minute running time, telling quite a dramatic, era-spanning story with great economy.

Very highly recommended, “Beyond the Curtain” screens this Sunday night, Feb. 26 and the following Wednesday March 1 as part of programming blocks of the 2017 Winter Film Awards.