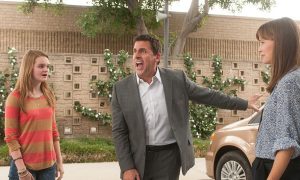 Automata, for the people
By Joe Bendel
biggersmaller
Print

Ever thought Asimov’s Three Laws of Robotics were too complicated? Happily, the ROC robotics corporation has distilled them down to two prime directives. Essentially, all robots are hardwired to cause no harm and to never alter themselves in any way. However, there seems to be a handful of rogue ‘bots, self-repairing and maybe even self-upgrading. An insurance investigator slowly starts to suspect that singularity may really be nigh in Gabe Ibáñez’s “Automata.”

By the year 2044, an environmental catastrophe and its radioactive aftermath have killed over 99 percent of Earth’s population. Yet, enough people are still paying premiums without filing claims to keep Jacq Vaucan’s insurance company in business. ROC is their bread-and-butter client, so every dark day, Vaucan goes out to debunk claims of robot wrongdoings.

Frankly, it is easy work because the First Protocol is ironclad (and people are idiots). Supposedly, the same is true of the Second Protocol, but Vaucan’s investigation turns up a maintenance robot that was reportedly healing itself before the crookedest cop in Oceania blew it away.

Before long, the trail of self-aware robots leads Vaucan to a “clockmaker” in the forbidden zone, who inadvertently awakens a sexbot, before company goons crash the party. Not exactly the sharpest sonic screwdriver, Vaucan does not realize his own people are out to get him. But since the First Protocol is still in force, the newly sentient robots drag him through the desert to temporary safety in a ridiculously overlong sequence that cries out for the “Mystery Science Theater 3000” treatment.

Sure, one might say “Automata” owes a debt to “Bladerunner,” but it still has the palpable feel of a lived-in world teetering on the brink of anarchy. Yet, it also happens to be one of those strangely contradictory genre films that uses the specter of A.I. run amok to scare the willies out of viewers during the setup, but lectures us in the third act that we have had this coming all along for our environmental naughtiness and should therefore willingly resign ourselves to extinction and just toss the keys to the planet to our stoner roommate’s Xbox. The point is that it gets preachy, in an apocalyptic way.

Nevertheless, Antonio Banderas does his moody, hardboiled thing with authority as Vaucan. Likewise, Robert Forster is reliably flinty as Vaucan’s boss, Bob Bold. Melanie Griffith is not wildly convincing as the underground robot tinkerer, but hats off for the professionalism she and Banderas show in their scenes together, considering recent events. The rest of the ensemble looks like they wandered in from the Network 23 boardroom in the old “Max Headroom” show.

While the robot design is not wildly dissimilar from scores of films, Ibáñez and production designer Patrick Salvador fully realize the grungy dystopian world, presumably on a limited budget. Too bad they are so determined to end it all.

Ambitious but too self-important to fully deliver the genre goods, “Automata” opens this Friday, Oct. 10, in New York.