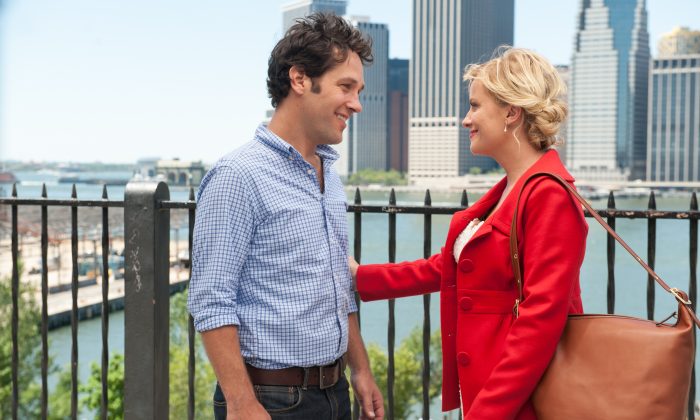 Paul Rudd and Amy Poehler in “They Came Together,” a rom-com that skewers rom-coms. (Lionsgate)
Entertainment

They came together, but can they stay together for a sequel?
By Joe Bendel

If you haven’t seen “When Harry Met Sally” by now, you’re probably never going to. However, those who remember when Billy Crystal and Meg Ryan were movie stars will appreciate most of the gags in David Wain’s “They Came Together.”

Should you doubt it, Joel and Molly will assert the New Yorkiness of their romance right from the start, as they recount their story for another couple with the profound misfortune to be having dinner with them.

As the flashback narrative commences, Joel is about to break up with Tiffany, his hot-on-the-outside, icy-on-the-inside girlfriend. Since Molly is still smarting from her last breakup, their mutual friends want to fix them up (at a Halloween party).

Instead, they bicker like cats and dogs. It hardly helps the matter when Molly learns that Joel works for the candy store conglomerate trying to force her cutesy corner store out of business. Of course they will still fall for it, but they will take turns sabotaging their budding relationship.

Wain and co-writer Michael Showalter are so busy skewering romantic comedy clichés that they do not even bother wasting time on boring stuff like characterization. Their humor whipsaws back and forth between droll satire and unrepentantly naughty slapstick. It is often quite funny, but after a while viewers will realize there is nothing for them to invest in emotionally.

Even Mel Brooks classics (the gold standard of movie spoofs) had a bit of heart anchoring them. “They Came Together” is really more like a serial skit or a Web series than a movie. Still, you have to respect Wain and Showalter’s willingness to tip over sacred cows and subvert viewers’ expectations by twisting the very rom-com conventions they are sending up.

As Molly and Joel, Amy Poehler and Paul Rudd are game for just about any joke in questionable taste, but they are still rather low wattage when it comes to screen charisma.

On the other hand, Cobie Smulders’s Tiffany is appropriately cold and decorative, while audiences may never look at Christopher Meloni (“Law & Order: SVU”) in the same way after his outrageous turn as Joel’s boss, Roland. Norah Jones also has an amusing cameo as herself, but if you do not remember when MTV and VH-1 played music videos in the 1980s, you probably won’t get it.