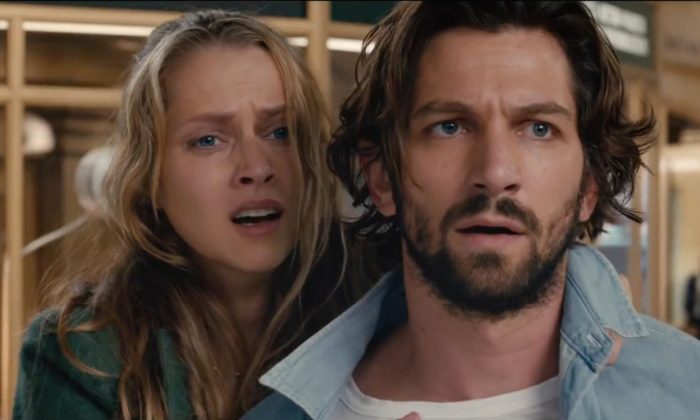 Caught up in karma
By Joe Bendel
biggersmaller
Print

You know what they say about karma. Contemporary art can be pretty sinister too. Dylan Branson will face both for the sake of the woman he loves (despite knowing her less than a week) in Paul Currie’s “2:22,” which opens Friday, June 30, in select cities.

Branson is an air traffic-controller with a knack for keeping the arrivals and departures flowing smoothly through his aptitude for perceiving patterns. However, one fateful day, at 2:22 p.m., Branson falls into some sort of cosmically-induced reverie, snapping out of it just in time to avert a mid-air collision. This near-miss is so conspicuously obvious, Branson is suspended for a month, pending an official review.

During his time off, Branson starts to notice weird patterns in his life. The people are different, but the same chain of events culminates in a rather chaotic 2:22 in Grand Central. Each time around, strange electrical short circuits plague the terminal, while Branson gets visions of a violent shooting in the rotunda.

However, the time off isn’t all bad. Branson meets and quickly falls for Sarah Barton. It must be fate, since they share the same birthday. Unfortunately, Branson soon starts to suspect Barton is involved in the karmic happening he is struggling to understand—in a way that could be very dangerous for her.

It sounds kind of woo-woo, but screenwriters Todd Stein and Nathan Parker rather cleverly combine metaphysics and astronomy (dissipated energy from a distant supernova may also be a contributing factor) in what could be considered a “Groundhog Day”-style movie, but with a cumulative memory. Each day until Branson and Barton’s 30th birthday, his visions repeat, but his interpretations evolve in significant ways.

Despite often looking like an unshaven homeless person, Michiel Huisman still pairs up rather attractively with Teresa Palmer. There really seems to be some genuine electricity between them, which is critically important for us to buy into their immediate attraction and subsequent relationship turmoil.

Sam Reid is also effectively slimy as her artist ex-boyfriend, Jonas Edman, in a vintage 1980s Richard Tyson kind of way. Plus, veteran Australian singer-character actor John Waters (not the Pope of Trash) gets to chew a spot of scenery as a sardonic rival gallerist.

Somehow, Currie manages to avoid dopey New Age sentimentality, even while he piles on the fickleness of fate. In fact, “2:22” is really a nice little package that looks appropriately slick and mysterious thanks to cinematographer David Eggby. Frankly, it is rather baffling the film is getting a wider distribution, because it is far better than a lot of flicks that escape into theaters. At least, VOD (including iTunes) is an option. Recommended as a pleasant sleeper-surprise, “2:22” opens June 30 in limited release (the Gateway Film Center in Columbus).