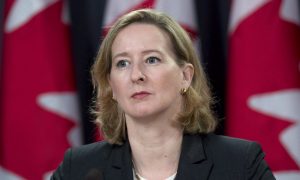 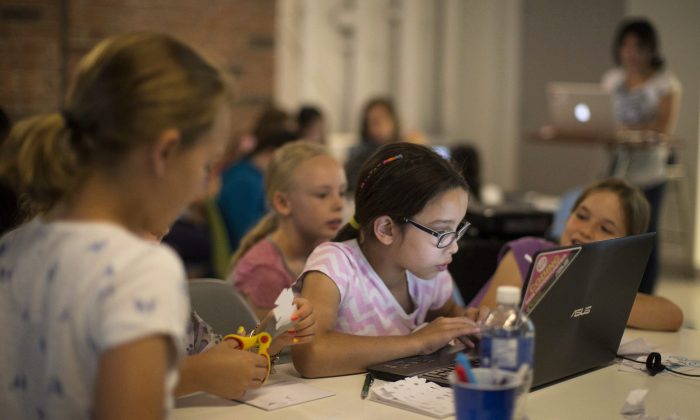 Girls learn about computers at an early age by attending a workshop in Toronto on July 16, 2014. The need to fill the skilled jobs required in the information and communications technology field means that it is important to encourage a greater percentage of young women to get involved. (The Canadian Press/Chris Young)
Business

Canada’s labour market must overcome significant challenges if it is to contribute to economic growth, but one field that could provide the biggest bang for the buck is information and communications technology (ICT).

It’s been six years and counting since the onset of the financial crisis, leading many economists and financial markets participants to believe the Western world is trapped in a “new normal” of slower economic growth.

The recovery has been slow and the labour market is one area needing significant improvement. It has become harder to find the right job, and the quality of jobs itself has eroded. Without knowing if and when the economy is going to get back on track, firms are less certain about hiring.

And the right kind of job creation hasn’t been taking place. Bank of Canada senior deputy governor Carolyn Wilkins laid out in a Feb. 10 speech the issues plaguing the labour market.

She pointed to the participation rate of prime-age workers (aged 25-54) in the labour force falling substantially in 2014. Also, “More than one in four people who have part-time jobs would prefer to work full-time,” Wilkins said.

Wilkins pointed out that prime-age and young workers remain underemployed, while the labour gap (excess capacity in the labour market) was about 270,000 jobs at the end of 2014.

But Canada is poised to do relatively better (along with the U.S.) as compared to Japan and Europe when it comes to ramping up economic growth. One reason for this, suggested by Philip Cross, a researcher at the Fraser Institute, is that Canada has one of the youngest and best-educated populations in the developed world.

In the report “Is Slow Growth the New Normal for Canada?” published March 10, Cross writes, “The populations of Canada and the United States are younger because of a higher birth rate and more immigration than in Japan and the European Union, and so the potential drag from demographics is lower in North America.”

That potential drag is what proponents of the “new normal” say comes from an aging labour force.

So there is reason for Canada to be optimistic, but there is much work to be done.

Developing a more technology-savvy workforce is essential for Canada to improve economic growth.

On Monday, March 16, the Information and Communications Technology Council (ICTC) released its “Labour Market Outlook” for 2015 to 2019. The ICTC is a leading national centre of expertise conducting research, developing policy, and creating talent solutions for the digital economy. It was formed in 1993.

It determined that cumulative hiring requirements in Canada for ICT talent are expected to be over 182,000 by 2019. Also, a 1 percent increase in labour productivity through adoption of advanced technologies would yield $8 billion (about 0.4 percent of GDP) to the Canadian economy.

Canada’s Labour Market Could Get Worse Before It Gets Better
“Technology helps a lot with gaining any productivity and can play a huge role, so we are encouraging employers and enterprises to adopt more and more technology to enable that labour productivity factor,” said Sharif Faisal in a phone interview with Epoch Times. Faisal, an economist, is the lead researcher for the ICTC outlook report.

Canada has done well historically in the ICT field, including during the economic downturn. “Even during the downtime we have seen significant growth in ICT jobs across the board. Canadian employers are extremely adaptable and entrepreneurial,” said Faisal.

But the challenge now facing the labour market requires Canada to do even better. Employers—31 percent, according to ICTC’s labour market outlook survey—have difficulty hiring people with the right skills—both technical and business.

“Unless adequately addressed, this will cause particular strife to Canada’s prosperity, as growth in Canadian workers’ productivity levels has fallen notably since 2001,” according to the ICTC report.

We are encouraging employers and enterprises to adopt more and more technology to enable that labour productivity factor.
— Sharif Faisal, Information and Communications Technology Council

Perceptions are slowly changing that ICT jobs are purely technical, and amid increased automation, demand is growing for information processing and other high cognitive skills.

But ICTC also finds that some long-lasting perceptions about ICT jobs don’t go away easily.

“One of the key findings is the perception about ‘Oh, ICT jobs are for geeks, doing coding.’ But things have moved on from that,” Faisal explained. “We’re not in that age anymore—there’s so many cool things that you’re able to do.”

ICTC believes that a “ground-up” approach of working with kids even before high school is critical. One of ICTC’s programs aligns high school curricula to include ICT courses, and thus the gender mix is closer to 50-50 gaining exposure to ICT.

Faisal noted that once youth choose their major in university, it’s hard to get back to ICT. “If you showcase the potential in this career field as early as possible, even before high school, then more and more kids are picking up those options, those courses,” he said.

Solving the supply and demand imbalance between employer and worker in ICT is crucial. It not only involves developing the right skillset, but also reaching out to immigrants and aboriginal people—diverse pockets of talent.

The report finds that 90 percent of Canada’s ICT employers have no diversity recruitment programs in place and that they tend to hire the best candidate regardless of gender, age, or race.

“It’s a similar goal with immigrants and aboriginal people: To increase their representation in that ICT workforce, take initiatives and measures today,” said Faisal.

In addition to broadening the workforce for ICT jobs, initiatives such as on-the-job training, apprenticeships, co-op programs, wage subsidies to improve job readiness of youth, and employer representation on the governing boards of educational institutions will all help to better prepare workers to meet the ICT challenge.

“If it starts early and it starts now, then five or 10 years down the road, we’re going to see the changes reflecting in our workforce,” Faisal said.

And in turn, Canada’s workforce should show an increasing percentage of full-time jobs being created, labour productivity gains, and wage inflation—all factors present in an environment of robust economic growth.