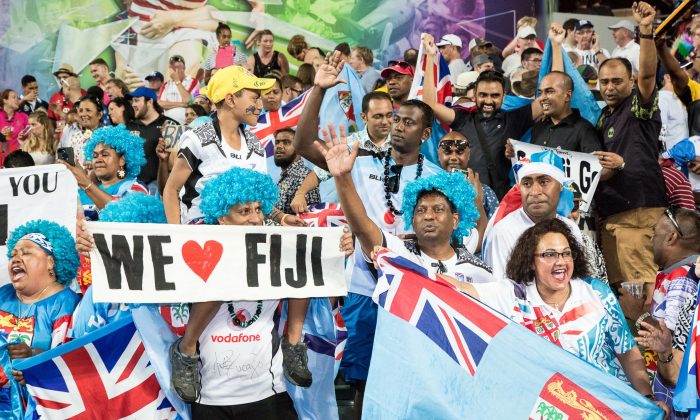 HONG KONG—Another year, another Sevens. This was another memorable event, and you couldn’t script the ending. Fiji, since Rio, had been a shadow of their former selves. They hadn’t won on the Sevens circuit since Hong Kong last year. And their performance on Saturday, with a 17-17 draw against Wales, signaled the doldrums may continue.

How wrong. Late Saturday afternoon, Fiji played New Zealand, and won a scintillating match 17-14. This was a pool game, but worthy of a final. But it set the tone for what was instore on Sunday, Fiji had rediscovered their mojo.

Their quarterfinal final victory over Canada (29-14) and semifinal over Australia (33-12) produced exhilarating rugby in patches, but the final against South Africa, was pure gold from start to finish. A comfortable 22-0 win capped by four amazing tries. For Neil Powell, and his South Africa team, the wait for victory in Hong Kong continues: it must surely come at some stage for this highly talented team, but on Sunday night, after two grueling matches to reach the final (21-19 against New Zealand in the quarterfinal, and 29-24 after extra time against the USA in the semifinal), they faced a rampant and stoked Fijian side, and it was a match too far.

The final was also redemption: not only for Fiji in rediscovering their form, but for their new coach Gareth Baber. He had difficult shoes to fill, after Ben Friday, but victory in Hong Kong, will do both his confidence and Fiji’s confidence a stack of good, and quieten doubters for now. Before Fiji, Baber coached Hong Kong, so this was return home, and where better to find form; and Fiji, winners seventeen times in Hong Kong, the stadium must feel like spiritual territory.

The consistency of South Africa, mean they still lead the HSBC World Sevens standings. They have played in all seven finals this season and it’s unlikely any team will catch them; no other side has come close to playing with the consistency of the Blitzbokke.

The USA was another team to shine in Hong Kong, and the crowd treated to an electrifying performance of the sheer speed of Perry Baker, their ‘flyer’. The USA came so close to facing Fiji in the final, producing a last gasp try to even the score against South Africa in the semifinal, but the tenacity of the Blitzbokke ensured they scored the golden points in extra time.

On Saturday, most games went to form, with a few exceptions, such as Australia edging England 12-10: but on Sunday, with every game being knock-out rugby, the matches were close affairs. Sevens is clearly a coached game, lacking some of the flamboyance and openness of yesteryear, but played by athletes supremely fit, specializing in the shortened version of the game.

Honours on Sunday went to New Zealand in the Plate (10-7 over Argentina); Scotland in the Trophy (21-19 over Kenya) and Japan in the Shield (28-21 over Wales, reversing their earlier pool loss 21-34 against Wales).

Next week, the Sevens circus goes to Singapore for the eighth leg of the circuit, with Hong Kong replacing South Korea as the sixteenth team.

The Hong Kong Sevens is a veritable rugby Fest. The weekend provided three tournaments in one (four if you count the midweek GFC Tens, a quality tournament, that acts as ‘taster’ for the weekend to come).

For the Main event, it’s about points, your league standing, and avoiding relegation. For Qualifying it’s about winning. There is no second place. The winner takes all. For the Women, their final was played on Friday evening, and Japan, the most consistent of the twelve women’s teams beat South Africa in the final 22-10, and now join the Sevens circuit next season.

In the Men’s Qualifier, Spain edged Germany in the final 12-7. Both teams were undefeated coming into the final, but Spain, more experienced and sevens savvy, edged their European rivals.

In both the Women’s and Men’s tournament there was abundant commitment and talent, and it’s going to be a shame not to see Germany, Chile, Uganda or Hong Kong grace a larger stage to nurture their talent. The Olympic experience has and will continue to broaden the appeal of the game for Men and Women, and more avenues for these nations need to be developed.

The Qualifiers added another dimension to the Hong Kong Sevens, and long may this may last.

Whilst the rugby is superlative, the off-pitch activity in Hong Kong more than matches the on-pitch spectacle.  This was evident in the Sunday March Past, which has become an advert for the community reach Sevens enables in Hong Kong with mini rugby, and less privileged sectors of Hong Kong society. Hardly any teams take part; gone are the days of the teams parading in their colours, but what is evident is the grass roots of the game in Hong Kong are exceedingly healthy.

And all around Hong Kong, whether in Chater Garden, Happy Valley or Causeway Bay, Hong Kong is abuzz with rugby for the week. At the Stadium, the crowd create an atmosphere that’s unique: with people in costumes and outfits that make this event as much a carnival as a competition. There were dinosaurs, cartoon characters, super-heroes, cops, robbers, pirates, pilots, unicorns and playing cards…to name just a few.

Come Sunday, after the fireworks, and the immediate celebrations, as people melt into the Hong Kong evening, promises are made to mark diaries for next year. This is Hong Kong sport and community at its best, and rugby could not ask for a better advert for the game.