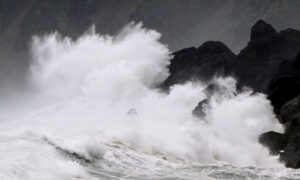 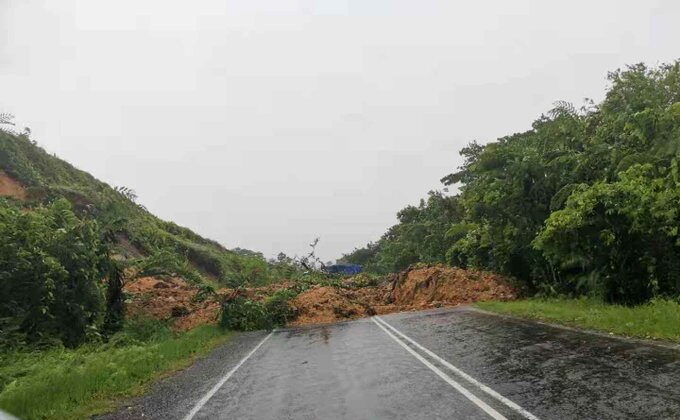 A landslide is seen on Kings Road in Viwa, as Cyclone Yasa passes through Fiji, Dec. 17, 2020, in this photo obtained from social media. (Fiji Roads Authority/via Reuters)
Asia & Pacific

SYDNEY—Fiji ordered its entire population to take shelter on Thursday in the path of what is expected to be the worst storm in its recorded history.

Cyclone Yasa, a top category five storm expected to bring winds of up to 250 km per hour (155 miles per hour) and torrential rain, made landfall over Bua province on the northern island of Vanua Levu at about 6 p.m. local time (0600 GMT).

“The impact for this super storm is more or less the entire country,” Prime Minister Frank Bainimarama said in a video posted on Facebook. He told the country’s near 1 million population to find safe shelter ahead of a 14-hour nationwide curfew beginning 4 p.m. (0400 GMT).

Yasa would “easily surpass” the strength of 2016’s Cyclone Winston, he added, referring to the southern hemisphere’s most intense tropical storm on record, which killed more than 40 Fijians and left tens of thousands of people homeless.

More than 95 percent of the population live in the storm’s direct path, said Bainimarama. He said weather forecasts anticipated flash flooding and “severe coastal inundation” including waves up to 10 meters (33 ft) high.

Images shared on social media showed roads blocked by landslides, floodwaters, and fallen trees. All roads in Rakiraki, a district on the main island with about 30,000 residents, were flooded, according to local media.

The curfew order was given as part of a declaration of a state of natural disaster, which will run for 30 days.

Residents in the areas deemed most at risk said the warnings were been heeded.

“The power is off, we don’t know about anybody, the winds are quite strong, but we are okay for the time being,” said a hotel worker in Bua who declined to give his name.

“When daylight comes, then we’ll know what damage has been done,” added the hotel worker by telephone.

Fiji banned the running of public transport, and was taking precautions with some 50 foreign yachts moored in the southern part of the island chain.

“The boats have been moved to mangrove shelter, which provide good protection against the winds,” said Cynthia Rasch, chief executive officer of Port Denarau Marina. Fiji reopened to foreign boats in October in a bid to revive a tourism industry hit hard by the coronavirus.

By Byron Kaye and Colin Packham