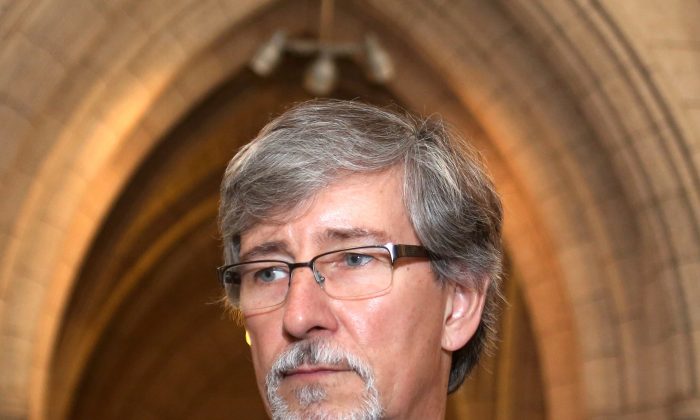 Privacy Commissioner Daniel Therrien prepares to appear at the Commons Human Rights committee on Parliament Hill June 10, 2014. Therrien has raised concerns about the government’s anti-terrorism bill but has yet to pass final judgement. (The Canadian Press/Fred Chartrand)
Canada

Privacy is the circle of personal security that lets democracy flourish. It is the space that gives dissent room to grow and individuals an unguarded moment for truly free expression. It is the void where people can be themselves, unconcerned what their friends, family, or government may think.

It is also the dark corner where criminals lurk and terrorists hatch their plots.

Staving off future terrorist attacks and combating cyber crime have put police and intelligence agencies around the world at odds with the privacy of their citizens. Canada is no different, as evidenced by the Privacy Commissioner’s reaction to the government’s new anti-terror legislation, Bill C-51.

“This Act would seemingly allow departments and agencies to share the personal information of all individuals, including ordinary Canadians who may not be suspected of terrorist activities, for the purpose of detecting and identifying new security threats,” wrote Privacy Commissioner Daniel Therrien in a preliminary assessment on the day the act was tabled.

The commissioner, who declined further comment on the bill, wrote that the new powers called for more oversight of the government, raising a long-standing issue.

The government says the measures in C-51 are necessary to disrupt terrorist attacks on Canadian soil and make it easier for law enforcement agencies to detain suspected terrorists before they attack. Privacy advocates allege that terrorism is a cover to extend government surveillance.

The Liberals have criticized the bill but will back it, while the New Democrats likely will not. Green Party leader Elizabeth May says C-51 goes too far, as does an editorial in The Globe and Mail.

Debate on the bill has yet to begin, but the legislation raises questions that have been circling within Canada’s online society since the Internet became our communication lifeline.

We live in an age where citizens sign away their privacy without a second thought to play Fruit Ninja, and gleefully help companies like Facebook buy and sell their life’s data to facilitate targeted advertising.

Privacy advocates worry that the average citizen doesn’t even understand what privacy means. Too many people shrug off the loss of privacy with the declaration that they have nothing to hide, as if their medical records, credit scores, and Internet browsing history are something they’d be willing to publicly broadcast.

Meanwhile, security hawks in democratic countries seem too eager to partake in mass surveillance of the kind authoritarian governments have zealously pursued. We live in an age when governments have the ability to monitor the digitized lives of their entire population.

While citizens object, they also give apps on their mobile phone permission to monitor their text messages and location, and even activate their microphone to see what they are listening to or talking about.

The digital age has turned online communication into the lifeblood of the global economy. It has transformed our lives into social media content streams. And it has created new avenues to cripple critical infrastructure and conspire for malicious intentions.

There are few generally accepted ways to deal with most of these problems. The main solution is defensive: Secure the data. That means encrypting emails, making complicated passwords, and having users exercise strict digital hygiene (i.e. not downloading shifty content or opening email attachments they weren’t expecting).

The problem is that the bad guys, if they really want to, can generally find their way around all those efforts. And if security reaches the point where cyber criminals can’t hack in, that also probably means terrorists and others have ways to secretly plot their deeds without security agencies being able to detect them.

That’s part of the reason why governments, including Canada’s, want private companies to cooperate with security forces to provide access to user data, including communications and metadata (facts about those communications, such as time, duration, point of origin).

The problem here is that governments and conglomerates generally want the same thing: easy access to the personal information of Canadians. Companies want it for profit, while governments want it for security purposes. Although both can make claim to using that information to provide important services, neither can say they asked for informed consent.

The coming debate on C-51 will bring these issues to the forefront, and will give the government a chance to explain how it intends to balance privacy rights and national security. It will also give critics a chance to explain the alternatives in an age when sticks and stones can still break bones, but the ones and zeroes of the digital world can lead to much worse.