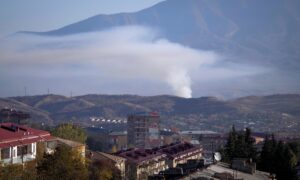 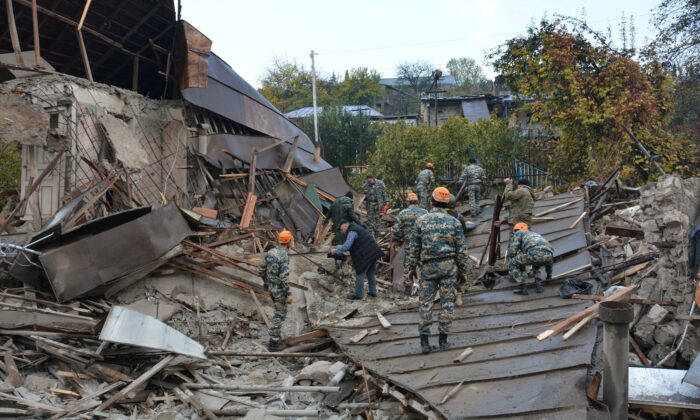 A view shows what is said to be the aftermath of recent shelling in the city of Stepanakert during a military conflict over the breakaway region of Nagorno-Karabakh, in this handout photo released on Nov. 6, 2020. (Armenian Unified Infocentre/Handout via Reuters)
Europe

YEREVAN/BAKU—Armenia reported heavy fighting around a strategic city in Nagorno-Karabakh on Monday, a day after Azerbaijan said it had captured it in a major breakthrough after six weeks of bloodshed.

People celebrated in the streets of Azerbaijan’s capital, Baku, on Sunday when President Ilham Aliyev announced his country’s forces had taken Shusha, which sits on a mountain top overlooking Nagorno-Karabakh’s main city, Stepanakert.

Armenia denied the mountain enclave’s ethnic Armenian forces had lost control of the city Armenians call Shushi, but said fighting around it was heavy.

“The combat in the vicinity of Shushi goes on. The Nagorno-Karabakh army units are successfully carrying out their mission, depriving the enemy of the initiative,” said Armenian defense ministry spokeswoman Shushan Stepanyan.

Emboldened by Turkish support, Azerbaijan has since Sept. 27 retaken much of the land in and around Nagorno-Karabakh that it lost in a war over the breakaway territory which killed an estimated 30,000 in the 1990s.

Several thousand people are feared killed in the latest flare-up of the conflict over territory which is internationally recognized as part of Azerbaijan but populated and controlled by ethnic Armenians.

Three ceasefires have failed in the past six weeks and Azerbaijan’s superior weaponry and battlefield gains have reduced its incentive to seek a lasting peace deal.

Shusha, or Shushi, is bordered by sheer cliffs and could serve as a staging post for an Azeri assault on Stepanakert, military and political analysts said.

Its population was predominantly made up of Azeris before the 1991-94 war, and it is culturally significant to both sides.

Russia and Turkey Look On

Russia, which held vast influence in the South Caucasus during Soviet times, has a defense pact with Armenia but also has good relations with Azerbaijan, a gas and oil-producing state whose pipelines have not been affected by the fighting.

Military analysts say direct Russian military involvement in the conflict is unlikely unless Armenia itself is deliberately attacked, and that Turkey will probably not step up its involvement if Azeri advances continue.

In the latest fighting, Azerbaijan’s defense ministry denied Armenian reports that its forces were shelling Stepanakert, and accused Armenian forces of firing at Azeri positions along the two former Soviet republics’ border. Armenia denied this.

Azerbaijan said positions in its Tovuz and Gadabay regions were under fire, and Armenia reported fighting in various parts of the combat zone.