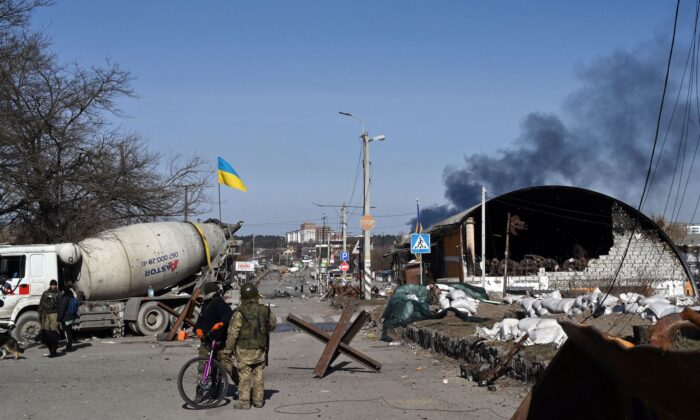 Ukrainian soldiers are on guard in Irpin, north of Kyiv, on March 12, 2022. (Sergei Supinsky /AFP via Getty Images)
Russia-Ukraine War

Fighting raged northwest of Kyiv on Saturday, with the bulk of Russian ground forces around 16 miles from the center of the Ukrainian capital, according to British intelligence, while sources told The Epoch Times that Ukrainian forces were battling groups of Russian saboteurs in several Kyiv suburbs.

Elements of a large Russian column north of Kyiv had dispersed, likely to regroup for a fresh offensive against Kyiv and possibly to reduce its vulnerability to Ukranian counter attacks, Britain’s Ministry of Defense said in a situational update on Saturday.

Roman Brovko, a Ukrainian filmmaker living in a suburb southwest of Kyiv, told The Epoch Times that, on Saturday, Ukrainian forces were battling groups of saboteurs in Obuchiv and Boryspil, municipalities near the capital.

“Overnight and into this morning, Russian forces attacked us with missiles,” Brovko said.  “Two airports have been destroyed,” he added, one in Lutsk and the other in Vasylkiv.

Lutsk is around 250 miles west of Kyiv and Vasylkiv is around 22 miles southwest of the capital.

Ihor Polishchuk, the mayor of Lutsk, said the military airfield in the city had been completely destroyed after being hit with four missiles on Saturday morning.

“It is difficult to say why these air strikes were carried out, as our airfield was put out of operation on February 24 when it was shelled for the first time. It could no longer be used,” Polishchuk said, according to Ukrinform.

“Now the airfield has been completely destroyed. They hit a fuel warehouse. The airfield was probably fired at again only to increase panic and fear among the population,” he added.

Ukrinform reported that the shelling of the Lutsk airfield killed four Ukrainian servicemen and wounded six others.

Vasylkiv mayor Natalia Balasynovych said that the local airport had been destroyed due to Russian shelling and missile strikes.

“Today, at about 07:00 a.m., the enemy forces shelled the town of Vasylkiv, eight missiles launched, shelled the airport. As a result of missile attacks, the airport was completely destroyed, the airstrip was destroyed, the ammunition depot detonated and they are still detonating,” she said in a video message, as cited by Interfax Ukraine.

“The capital, near which the fighting continues, is preparing for defense. We continue to strengthen checkpoints, create reserves of food, medicine, and essential goods,” Klitschko said in a video message on his Telegram channel.

“We also continue to ensure the operation of the critical infrastructure of the city, the life of the capital,” he added.

Brovko, who said he’s about 7 miles away from a major front line near Kyiv, told The Epoch Times that there were repeated clashes during the day between Ukrainian forces and groups of Russian saboteurs in Obukhiv, a suburb 29 miles southwest of the capital, and Boryspil, around 21 miles from Kyiv.

“Several churches have been destroyed by Russian shelling,” he said. “It’s really sad to see historical architecture turned to rubble.”

The governor of the Kyiv region Oleksiy Kuleba said fighting and threats of Russian air attacks were continuing on Saturday morning but later said some evacuations were moving ahead, according to Reuters.

“We will try to get people out every day, as long as it’s possible to observe a ceasefire,” he said.