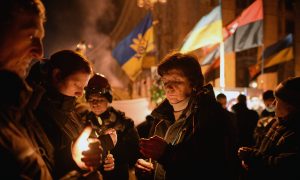 How Could the EU Do More for Ukraine?
0 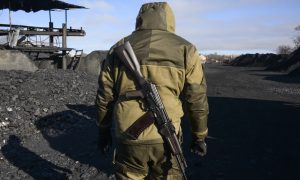 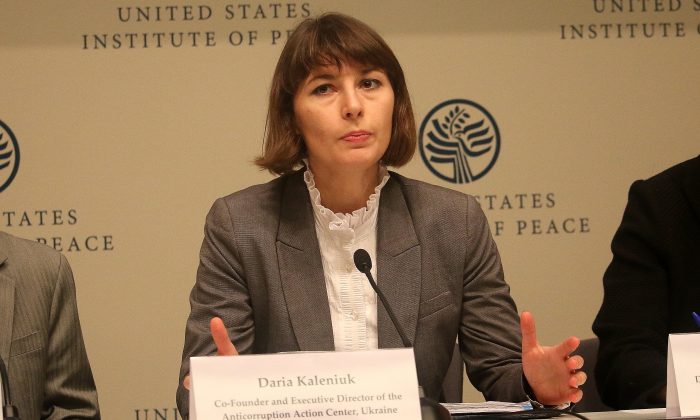 Most every national leader today is against corruption now, but that's far from enough to eliminate it, as the Ukraine experience proves.
By Gary Feuerberg
FONT BFONT SText size
Print

WASHINGTON—In recent years, a consensus has arisen that endemic corruption is not only immoral in itself, but can undermine most everything that governments do to provide for the security and welfare of its citizens. A global consensus is emerging: corruption shouldn’t be tolerated anymore, and international cooperation is vital to getting rid of it.

The importance of eliminating corruption is today recognized by virtually all countries, whereas in the past, in many countries it could scarcely be mentioned. The United States and the European Union members are assisting countries in many ways to expose and prosecute corruption, making it riskier for individuals to do.

On Dec. 10, the U.S. Institute of Peace invited Assistant Secretary of State William Brownfield and other experts to discuss what is being done to combat corruption. The panel occurred on the day following the date the United Nations designated as World Anti-Corruption Day.

“There is no more corrosive effect to democracy and prosperity throughout the human race than corruption,” began Ambassador Brownfield. “It kills investment, it lowers economic growth, increases the cost to the economy and to the government everywhere it exists.”

Ambassador Brownfield mentioned the often cited amount of $2 trillion, which the World Bank estimated for the annual world costs of corruption— “larger than all but the two largest economies in the world,” he added.

Ambassador Brownfield was sworn in as assistant secretary for International Narcotics and Law Enforcement Affairs (INL) in Jan. 2011. It’s the organization that he heads that is providing assistance to states that need to find ways to identify and prosecute corruption, and to build institutions to lessen the appeal of corruption. Ambassador Brownfield holds the personal rank of Career Ambassador, the highest rank in the U.S. Foreign Service.

It kills investment, it lowers economic growth, increases the cost to the economy and to the government everywhere it exists.
— Ambassador William Brownfield, assistant secretary of state, International Narcotics and Law Enforcement Affairs (INL)

The Ukraine and its endemic corruption was used as a focal point for much of the discussion. The Ukraine underwent a revolution, caused in part by disgust with corruption. The Euromaidan in Kyiv started with massive demonstrationsat the end of 2013 and climaxed in February 2014. The then-president Viktor Yanukovych and his associates were finally ousted, but it required the sacrifice of about 100 lives.

Transparency International (TI) ranked Ukraine 142 out of 175 countries on its measure of corruption, Brownfield said. It ranked Ukraine 134 out of 142 countries in its lack of judicial independence. In a survey by TI the year before the Maidan, one-third of Ukrainians acknowledged personally paying a bribe for the preceding year.

The INL has been putting its resources into the Ukraine which historically had a systemic problem with corruption. Brownfield said $25 million had been well spent in the Ukraine in the last 18 months, primarily for training and equipping the Ukraine border guard service. The INL website states that among its objectives in Ukraine are “to reform the structure and operations of Ukrainian law enforcement agencies along European lines,” and “to bring Ukraine’s justice system up to international standards.”

Many components go into fighting corruption. The place to begin is to build international integrity standards that all nations can agree to apply to their societies, said Brownfield. The United Nations Convention Against Corruption, and in the United States, the Foreign Corrupt Practices Act (FCPA) are most often cited as references for defining the standard.

INL in the Ukraine has been working on technical solutions, including an online property registration system and online government contract procurement so that these contracts are not handled “behind closed doors.” In the criminal justice sector, there is a new inspector general in the Prosecutor General’s Office.

Andersen said that her organization has been running in the Ukraine a successful “No Bribery Campaign,” to educate the public; it has received many online pledges.

The INL work needs the active engagement and scrutiny of civil society. So, the panel at USIP was fortunate in having as a guest, Daria Kaleniuk, co-founder and executive director of the Anticorruption Action Centre, in Ukraine, who during the era of the Maidan was pursuing an information campaign aimed at freezing assets of Yanukovych and associates that were hidden in western jurisdictions.

Currently, the Anticorruption Action Center is implementing an INL grant to assist Ukraine’s Anticorruption Bureau in “selecting, vetting, and training new detectives and analysts as well as in monitoring the overall activities of the new bureau,” according to the moderator of the panel, Colin Cleary.

Kaleniuk said her organization is putting their emphasis on law enforcement for now and expressed appreciation for the pressures that the U.S., EU, International Monetary Fund, and World Bank place on Ukraine to discourage corruption. She said that if just civil society institutions, such as her organization, were alone without international support, “We would never convince our parliament, our president, or prime minister [to do] even five percent of what was achieved.”

In the days of Yanukovych, when there was no chance of investigating corruption, the civil society had one last hope and that was to approach members of the EU and the United States, which have real law enforcement. They made the case “to freeze assets that are of a suspicious origin.” There are a lot of assets acquired in Ukraine that are laundered in western states. The corrupt Ukrainian official can’t take his or her impunity for granted anymore, she said.

We should have independent law enforcement, independent prosecutors, and independent judiciary to investigate corruption and to put people into jail.
— Daria Kaleniuk, co-founder and executive director, Anticorruption Action Centre, Ukraine

Kaleniuk described, passionately at times, the uphill battle she and her organization have with the new leadership that has been unwilling to reform the system and change. She said there are two wars in the Ukraine: the kinetic one with Russia and the other with corruption. Her organization works on providing “practical tools for lawyers and journalists to use to spot and report about corruption.”

Investigations have found “state officials, judges, parliamentarians, ministers, deputy ministers … engaged in corruption. It has been reported in the media and the Ukrainian people are mad about it.” But “nothing happens on the law enforcement side,” she said. There is still flourishing impunity. She said that “it is a big problem” that corrupt people in high places, especially law enforcement, are not prosecuted, even when there are investigations and sanctions imposed by the Americans and the EU.

“We should have independent law enforcement, independent prosecutors, and independent judiciary to investigate corruption and to put people into jail.”

She wrote in a blog last March, “The Prosecutor-General of the era of the new president of Ukraine, Petro Poroshenko, did not bring to court any single criminal case against former Ukrainian officials enlisted in the EU sanctions list. Moreover, persons close to Yanukovych returned to power.”

In the same blog, she said, “Collapse of law enforcement and judicial system used for decades by high-ranking political elites to conceal corruption crimes instead of investigating them is a main prerequisite for impunity.” Only when the corrupt officials have a realistic chance of going to jail and losing their stolen assets will this impunity stop, she said.

Kaleniuk said that she was at odds with President of Ukraine Petro Poroshenko over the selection of the new director of the National Anti-Corruption Bureau, who needed to be independent from political influence in order to investigate corruption crimes of high-level officials in power. In the competition, they recommended a candidate whom an independent commission interviewed and who passed a polygraph test. But Poroshenko “wanted someone loyal to him,” she said.

In the end, Poroshenko’s candidate didn’t win the competition, but neither did their preferred candidate.

Kakeniuk got some moral support at the end of September, from our ambassador to Ukraine, Ambassador Geoffrey Pyatt, who said in a speech to businessmen and investors in Odessa, “There have been times when the Prosecutor General’s Office not only did not support investigations into corruption, but rather undermined prosecutors working on legitimate corruption cases,” according to Vice News.

Vice President Joe Biden’s visit to Ukraine in the second week of December may have been a bit awkward because Biden’s son, Hunter Biden, was hired by an energy company whose owner the ambassador accused of stealing $23 million from the Ukrainian people. This individual was the energy official in the Yanukovych government; his company acquired gas production licenses under questionable circumstances, according to Kaleniuk.