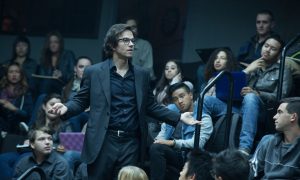 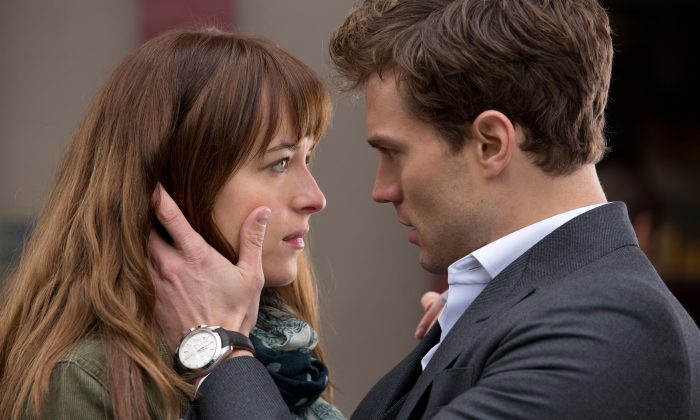 “Fifty Shades of Grey!” It’s a cultural event! Here’s how you know: three teenage girls sitting next to the reviewer at the screening had memorized the lines from the book, and they’d call them out like a latter-day “Rocky Horror Picture Show.”

Grey and Steele meet cute when she subs for her roommate who was supposed to interview him in his impressive office. She fumbles, stumbles, bites her pencil, looks adorable. He is intrigued! He flies his own helicopter with his name “Grey” stenciled on the side. She’s intrigued too!

Now, when you meet a cute, blush-y girl, the first thing that crosses your mind is that want to make her sign a legal contract that says you get to tie her up and whack her with all manner of medieval-looking nonsense in your “playroom,” right? Well he has cigarette burns on his chest! He had a troubled childhood! Aww! The girls forgive him. He’s too delicious not to!

At first she plays along. He’s like a prince! What a bod! And those billions! And that helicopter! Which he flies himself! It’s white—it’s a modern milk-white steed!

But she gets bored with it. You can see it coming a mile off. He thinks he’s in control. He thinks she’s all his.

And so she is for a while. Do you blame her? Pretty Woman’s Julia Roberts couldn’t keep her hands off Richard Gere’s billionaire either. But imagine this: she’s not content!

She’s a normal girl and wants some real lovin’, not a freak show.

Because Anastasia doesn’t get to touch his face! And he won’t stay the night. What woman in her right mind is going to put up with that? Regardless of the Little Red Corvette he buys her as a college graduation present…

Okay it wasn’t a Corvette, but it was red. But she’s not fast. (And he’s not Prince. Or a prince.) She’s a normal girl and wants some real lovin’, not a freak show.

Billionaires get whatever they want, and so he has a tantrum when she decides to go outside the contract (that she, clever girl, managed to never sign—her name is Steele, after all), and go see her mom. He stalks quickly after, sweeps her off her feet with an impromptu glider ride.

Then it’s back to the playroom one last time, but he shows his disturbed side a tad too much, annnnnnd—she’s done.

She asks why he’s so weird, and (spoiler alert) he admits he’s “fifty shades” of, um, messed up. And there you have it.

She’s Got a Career For Sure

The production value is above standard, very slick, all posh settings. It has an overall grey, steely feel—pun intended.

Jamie Dornan’s got himself a career now too, but it’ll take a more sophisticated film venture to see if he can actually bring some acting chops, i.e., career longevity.

Marcia Gay Harden as Grey’s mom is brought in to lend a legit-actor weightiness to this fluff.

“Fifty Shades of Grey” is a global best-seller. It set a record in Great Britain as the fastest-selling paperback ever. Over 100 million copies sold worldwide! Translated into 52 languages. But apparently critics don’t like it too much; its prose is generally viewed as, you know, poor.

It’s actually all very understandable. These movies that accrue cult-y followings of teenage girls—what is it the girls are really responding to?

In “Twilight” it was the concept of the vampire, overcome with desire, who was still able to sleep next to the young maiden and practice great forbearance, and not touch her. There’s great virtue in that. It makes the young ladies swoon in their minds.

In “Fifty Shades,” it’s the young, bad-boy billionaire. It takes mighty, mighty virtue to accumulate that much wealth so young. He just needs nurturing, and then… think of the nesting possibilities!

And so the young girls swoon for that, and memorize the lines, and look longingly out the window for any trace of a white helicopter, and sigh. They bow down, they pay homage. They’re responding to the hidden virtue. That’s not a bad thing.

We of the elder generation would prefer they memorized Shakespeare. C’mon kids—Romeo & Juliet! Not Fifty freaking Shades of Grey. No whips and handcuffs! Come now girls!

Well, but then, we, as a planet, are Fifty Shades of “messed up” too. Will somebody please write these girls some wholesome material they can pine and sigh to already, for crying out loud?