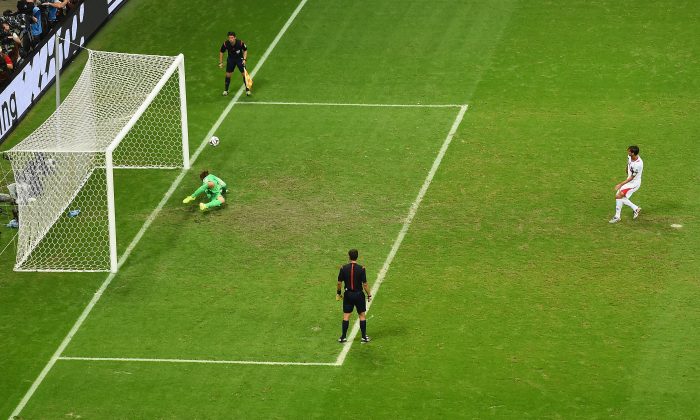 Tim Krul of the Netherlands saves a penalty kick by Bryan Ruiz of Costa Rica in a shootout during the 2014 FIFA World Cup Brazil Quarter Final match between the Netherlands and Costa Rica at Arena Fonte Nova on July 5, 2014 in Salvador, Brazil. (Laurence Griffiths/Getty Images)
Good to Know

The Brazil World Cup 2014 is in the semi final stage, and the rules have changed some what.

Going into the semi finals, all players’ disciplinary slate will be wiped clean. This means that single yellow cards accrued in the quarter finals, second round, and group stage will not carry over to the semi final.

Also, any single yellow cards in given to players in the semi finals won’t be brought over to the third and fourth placing match, and the championship match.

If the game goes to extra time, both teams will have to play two full 15 minute halves, with stoppage time added towards the end of each half.

The game goes into a penalty shootout if the score is still tied after extra time.

If the sides are still level after the first five kicks, a sudden-death ruling will kick in.

Ronaldo: Challenge on Neymar Was Intentional

RIO DE JANEIRO (AP) — Brazil great Ronaldo believes there was intention and violence in the challenge on Neymar that left the star forward with a fractured vertebra and ruled him out of the World Cup.

Neymar was carried off the field in severe pain late in Brazil’s 2-1 quarterfinal win over Colombia on Friday night after being kneed in the back in a collision with Juan Camilo Zuniga. Medical tests later confirmed Neymar had fractured a bone at the base of his back and would be on the sidelines for four weeks, news that sent the World Cup host nation into a somber mood.

Ronaldo, who shares the World Cup scoring record, told a news conference Saturday that “the injury was a very violent one.”

“We could see on television there was an intention by the Colombia player to actually cause some harm,” Ronaldo said. “I don’t think it was a normal football play. I do believe it was aggressive.”

The referee took no action on the field against Zuniga, who leaped high behind Neymar and at speed. The FIFA disciplinary committee planned to review video footage of the challenge.

“I thought it was a highly violent and unlawful move by the Colombia player, but that is not important anymore,” Ronaldo said. “We are fearful and sad for the loss of our player.”

“I didn’t like that very high knee so that leads me to believe it was a foul with intention to actually cause harm,” said Cannavaro, who was captain of the 2006 World Cup winning team.

In a post-match broadcast interview, Zuniga said he had no intention of injuring Neymar.

“I didn’t mean to hurt him, I was trying to defend my shirt, my country, as I’ve always done,” the Colombian defender said. “Sadly this happened. Hopefully, with God’s help, he’ll recover.”

Ronaldo said Brazil, which is desperate to win a sixth World Cup title on home soil, “loses enormously” in the absence of its undisputed star. The Brazilians play Germany in the semifinals on Tuesday, and Ronaldo said the loss of Neymar will give other forwards like Fred and Hulk more motivation.

Ronaldo revealed he had sent Neymar a message on Friday night.

“I told him that the whole country is proud of him,” said the 1994 and 2002 World Cup winner, “and that the support will be that the World Cup remains in Brazil and we will be able to dedicate it to him.”