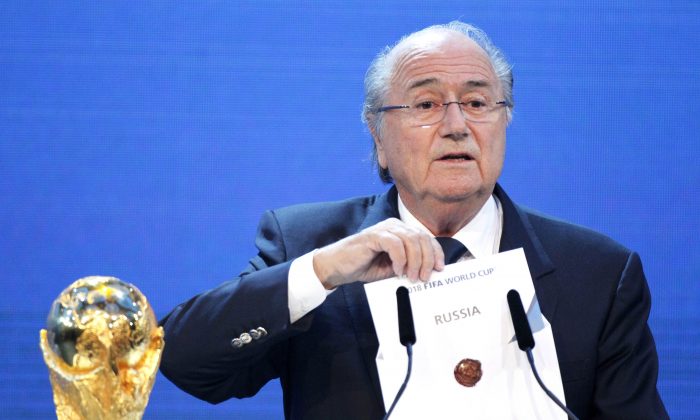 FIFA President Sepp Blatter announces Russia to host the 2018 World Cup during the announcement of the host country for the 2018 soccer World Cup in Zurich, Switzerland, on Dec. 2, 2010. FIFA has cleared Russia and Qatar of any wrongdoing in their winning bids for the next two World Cups. (AP Photo/Michael Probst)
Soccer

FIFA filed a “criminal complaint” against unnamed individuals on Tuesday, calling on Swiss federal prosecutors to investigate money transfers connected to the 2018 and 2022 World Cup bidding contests that were won by Russia and Qatar.

The unexpected move comes five days after FIFA had welcomed a “degree of closure” on the case.

“In particular there seem to be grounds for suspicion that, in isolated cases, international transfers of assets with connections to Switzerland took place, which merit examination by the criminal prosecution authorities,” FIFA said in a statement.

The significance of the dramatic-sounding request by FIFA President Sepp Blatter for a criminal investigation was far from clear. But FIFA said Swiss attorney general Michael Lauber will get all 430 confidential pages of American prosecutor Michael Garcia’s investigation.

Lauber, if he takes jurisdiction, could also have powers denied to Garcia, who was unable to force the handover of financial documents and phone records or to compel key witnesses to cooperate.

“The Swiss criminal prosecution authorities have the ability to conduct investigations under application of criminal procedural coercive measures,” the FIFA statement noted.

The Swiss prosecutors were brought in nearly four years after an often-discredited FIFA executive committee voted for the World Cup hosts after campaigns riddled with allegations of bribery, favor-seeking and voting pacts.

Tuesday’s announcement came five days after FIFA ethics judge Joachim Eckert’s summary of Garcia’s investigation was widely denounced as a whitewash of the Russian and Qatari bids, and FIFA voters.

But Blatter’s move certainly is a changed narrative from FIFA’s statement on Thursday following Eckert’s decision to close the case against the winning bidders.

That move was quickly challenged when Garcia appealed Eckert’s decision to FIFA, pointing to “numerous materially incomplete and erroneous representations of the facts and conclusions.”

Garcia and Eckert are expected to meet Thursday at an undisclosed location to try to mend their professional rift.

The perpetual skeptics of FIFA’s motives are likely to see Tuesday’s announcement as an apparent move to avert criticism. Blatter said in an interview released by FIFA that he acted on a request by Eckert.

In a simultaneous release, Eckert said in a separate FIFA interview that he submitted his advice of a criminal complaint “more or less at the same time” as his 42-page summary report was published last Thursday.

Within minutes of that report’s release, a “whitewash” verdict was winning in the court of public opinion.

The Russian and Qatari bid committees have always denied wrongdoing and pledged to continue their World Cup hosting plans, costing each state tens of billions of dollars in construction projects.

Eckert conceded there had been “problematic” acts of rule-breaking among most of the 11 nations in the bidding process. However, he concluded that any corruption was “only of very limited scope” and did not justify reviewing the December 2010 votes.

No details were given as to which financial or business laws Eckert or FIFA believe might have been broken.

Eckert continued to maintain Tuesday that “there is insufficient incriminating evidence” to question the FIFA board’s choice of Russia and Qatar.

Still, “there are indications of potential illegal or irregular conduct in certain areas,” he acknowledged, in stronger language than he used last week.

Those indications are still denied to a wider audience, including reform-minded newcomers on FIFA’s ruling board and others who want to know what evidence was unearthed.

Even Blatter insisted he has not read Garcia’s reports.

“I also was not the addressee of the investigatory report, which I have never seen,” the FIFA president said.

Whatever the Swiss attorney general decides, Garcia will continue to build cases against individual FIFA voters and bid staffers he has implicated in his case dossier.

“Much of this clarification work can be carried out by the FIFA Ethics Committee itself,” Eckert said Tuesday about Garcia, his committee co-chairman, “while the remainder is the responsibility of the relevant national investigatory authorities.”