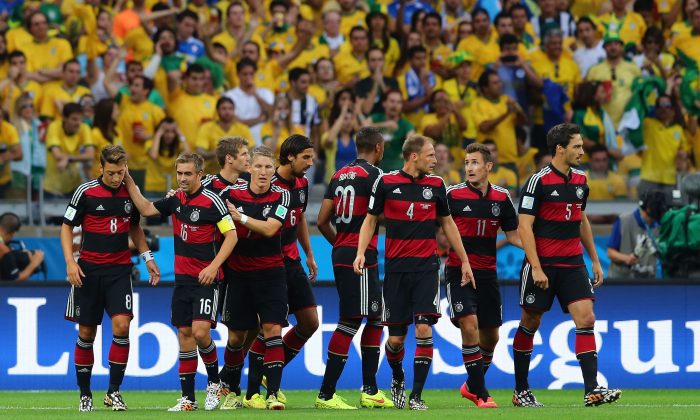 EA Sports’ FIFA game predicts a 3-1 win for Germany over Argentina in the World Cup final.

Lionel Messi then gets on the score sheet in the 75th minute, courtesy of an assist from Gonzalo Higuain.

The game then goes to extra time, and the Germans score two goals to win the match 3-1.

Toni Kroos finishes from a long range effort in the 112th minute, and Andre Schurrle provides an assist for Mueller in the 119th minute.

BERLIN (AP) — Thousands of football fans were already gathering at the German capital’s famous Brandenburg Gate many hours before the World Cup final kicked off in Brazil between Germany and Argentina.

A heavy rain shower sent fans scampering for cover early but a crowd re-emerged in greater numbers Sunday getting ready to watch the game in front of giant TV screens. Up to 100,000 football fans were expected at the “fan mile” alone.

Police closed a number of entrances to the public viewing event at least four hours before kickoff due to the sheer numbers of fans attending. Crowds began gathering with around six hours to go.

Other public viewing venues were also filling up, despite the likelihood of heavy rain across the country. Showers and summer storms were expected to move in from the southwest.

At Rio de Janeiro’s famous Maracana Stadium on Sunday, Germany is bidding to win its fourth World Cup title, its first as a reunified country.

West Germany’s triumph in 1990 came several months after the fall of the Berlin Wall, which passed in front of the Brandenburg Gate.

“Mauerfall” will be marked later this year with 25th anniversary celebrations, although the area would stage more celebrations on Tuesday if Germany beats Argentina.

If victorious, coach Joachim Loew’s team is scheduled to present the World Cup trophy to fans at the Brandenburg Gate. General manager Oliver Bierhoff said, however, there would be no party with the fans unless Germany wins the title.