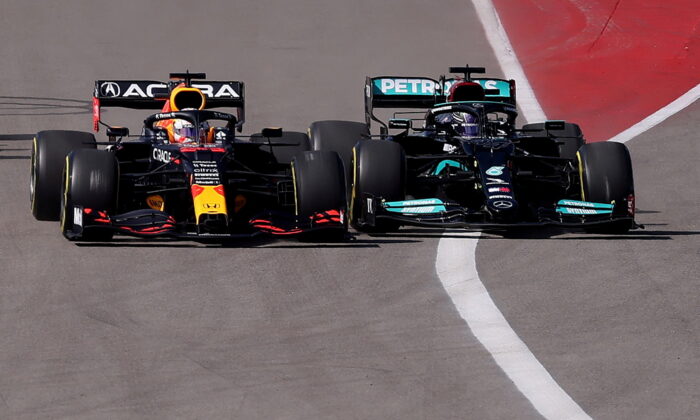 Red Bull's Max Verstappen and Mercedes' Lewis Hamilton in action at the start of the Formula One F1 - United States Grand Prix - Circuit of the Americas in Austin, Texas, U.S. on Oct. 24, 2021. (Mike Blake/Reuters)
Motorsports

Formula One drivers could face suspension or lose all their points for driving in an unsportsmanlike manner, race director Michael Masi has warned ahead of Sunday’s title-deciding battle at the season-ending Abu Dhabi Grand Prix.

Mercedes’ Lewis Hamilton, 36, and his 24-year-old Red Bull rival Max Verstappen head into the floodlit finale at the Yas Marina track level on points but Verstappen ahead 9-8 on wins, which would make him champion if both fail to score.

The pair have collided three times this season, including at the last race in Saudi Arabia, raising concerns about a thrilling season ending with a collision.

However, Masi sent a clear warning that such a scenario could result in severe consequences as he outlined the articles of the sport’s International Sporting Code (ISC) relating to “unsportsmanlike” conduct.

“In particular I would like to remind you of the following articles detailed below,” the Australian said in his event notes on Thursday.

He singled out Article 12.2.1l which deals with “any infringement of the principles of fairness in competition, behavior in an unsportsmanlike manner or attempt to influence the result of a competition in a way that is contrary to sporting ethics.”

Masi also mentioned Article 12.4.5 which covers penalties stewards could impose including “suspension for one or more competitions, withdrawal of points for the championship, cup, challenge, trophy, series.”

“I think that’s fair that they do it,” Hamilton, sitting alongside Verstappen, told reporters via video conference from Abu Dhabi on Thursday. “Hopefully, they won’t need to be used and we have a great race and we move forwards.”

Formula One titles have been settled by collisions before, most notably between Alain Prost and Ayrton Senna in 1989 and 1990 and Michael Schumacher and Damon Hill in 1994.

Schumacher and Villeneuve also collided at the last race of the 1997 season while battling for the lead, with the German disqualified from the season as a whole for his offense.

Champion in 1996, Hill told Sky Sports after the race in Jeddah that Verstappen’s style reminded him of Schumacher’s similarly uncompromising approach.

While he did not suggest Verstappen would resort to dirty tricks, the Dutchman’s on-track behavior has drawn scrutiny.

Stewards took a dim view of his defensive tactics against Hamilton in Jeddah and found him predominantly at fault for triggering the collision, handing him two-time penalties totaling 15 seconds.

Verstappen said he didn’t need to be reminded of the ISC.

“I know what’s in the sporting code,” he said.

“I think they can put it in every single race weekend, there’s nothing newly added for this weekend.”