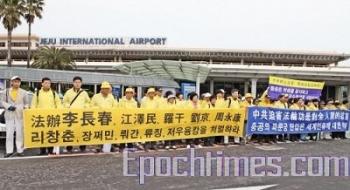 NEW YORK—The Federal Housing Finance Agency (FHFA) has sued 17 lenders and investment banks, including some of the nation’s biggest financial firms, over billions of dollars worth of toxic mortgage-backed securities.

Some of the nation’s biggest financial institutions were named, including Bank of America Corp., Citigroup Inc., and JPMorgan Chase & Co.

The FHFA, which oversees mortgage finance giants Fannie Mae and Freddie Mac, said the banks sold $196 billion worth of mortgage-related assets to the two companies that later almost collapsed as the real estate industry crumbled and the values of such securities plummeted.

Fannie and Freddie bought the loans and mortgage-backed securities from the issuers, and banks, which the FHFA said misled them regarding the assets’ quality. Both Fannie and Freddie almost collapsed in late 2008, and the federal government brought them under a federal conservatorship.

The FHFA did not specify the dollar amount of the lawsuits in total, but said that it sought to cancel these purchases, be compensated for lost principal and interest payments, as well as attorney and other fees.

In complaints filed in the court system of New York and Connecticut, the federal agency said that the loans “had different and more risky characteristics than the descriptions contained in the marketing and sales material,” or in other words, in the prospectuses and offer memorandums drafted by the banks on such mortgage-related securities.

In addition to falsely marketing such securities, the FHFA also accused banks of overstating the borrowers’ abilities to repay their loans.

The company that sold the most securities to Fannie and Freddie by dollar value was JPMorgan Chase (and its subsidiary Washington Mutual) with $33 billion, followed by Royal Bank of Scotland with $30 billion, and Deutsche Bank with $14 billion.

Shares of financial companies fell last Friday as a result of the announcement. Shares of Bank of America dropped 8.3 percent, shares of Goldman Sachs fell 4.6 percent, and shares of JPMorgan Chase declined 4.6 percent as investors feared that the lawsuits would drag on and take a toll on the banks’ profitability for years to come.

Bank of America, one of the most maligned banks in recent months due to its acquisition of Countrywide and the resulting home loans it brought onto its books, said last week that it would exit the home loan business.

Bank of America faces pending lawsuits directed at it, as well as firms that it acquired, such as Merrill Lynch and Countrywide.

Last week Bank of America issued a statement saying that Fannie and Freddie “continued to invest heavily in those securities even after their regulator told them they did not have the risk management capabilities to do so.”

“The losses Freddie may have sustained related to those securities are a result of market forces, not any alleged errors or omissions by Ally in connection with the securities,” Ally Financial spokesperson Gina Proia said.

Banks could argue that the financial collapse of 2008 was an extraordinary and previously unforeseeable event, and that Fannie and Freddie bought loans that were financially sound at the time of purchase, but are now pinning their losses on the banks after purchasing them in good faith.