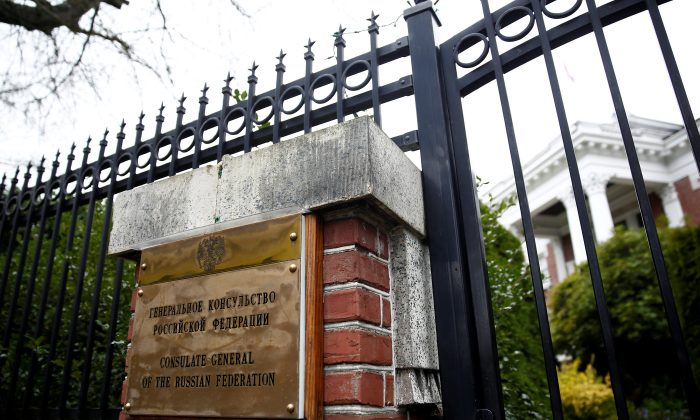 A sign at the gated entrance of the Consulate General of the Russian Federation in Seattle, Washington, U.S., March 26, 2018. (Reuters/Lindsey Wasson/File Photo)
US News

Fewer Russian Spies in US but Getting Harder to Track

WASHINGTON—The U.S. decision to expel 60 alleged spies is unlikely to cripple Russian spying in the United States because others have wormed and hacked their way into American companies, schools, and even the government, current and former U.S. officials said.

Moscow’s spy services still use the cover of embassies and consulates, as Washington does. But they also recruit Russian emigres, establish front companies, dispatch short-term travelers to the United States, recruit Americans, and penetrate computer networks, the officials said.

“Russia used to have one way of doing things. Now, Putin is—let a thousand flowers bloom,” a former senior U.S. official said in a recent interview, describing Moscow’s move to a more multifaceted approach under President Vladimir Putin, a former Soviet spy himself.

The FBI follows the movements and monitors the communications of suspected foreign spies, but the increased Russian presence and the advent of commercially available encrypted communications are an added challenge to the FBI’s counter-espionage force, said the officials, some of whom spoke on condition of anonymity to discuss the sensitive topic.

As one U.S. official put it when asked if Russian spying is a harder target: “It’s more complex now. The complexity comes in the techniques that can be used.”

While the CIA tracks foreign spies overseas and the National Security Agency monitors international communications, the FBI is responsible for spy-catching inside the United States.

The White House on Monday said it would expel 60 Russian diplomats, 12 of them at the U.N. mission, and close the Russian consulate in Seattle as part of a multi-nation response to the Kremlin’s alleged nerve agent attack on a former Russian spy in Britain.

Briefing reporters, a senior U.S. official said there were “well over” 100 Russian spies posing as diplomats in the United States before the expulsion order.

A veteran U.S. official charged with keeping tabs on Russian espionage said the administration downplayed the number of suspected Russian spies working under diplomatic cover to avoid giving the Russians a clearer picture of how many people are under surveillance.

The actual number varies over time, but “it averages more like 150 or so,” the official said.

“We’ve got a very, very, very good counter-intelligence apparatus,” said Robert Litt, a former general counsel for the U.S. Director of National Intelligence. “There are a lot of people in the FBI whose job it is to track these people—and they’re very good at it.”

Still, it can take 10 or more U.S. trained FBI and local law enforcement officers to keep tabs on one trained spy for a 24-hour period—covering back entrances to buildings and multiple elevators, and being alert for changes in clothes, cars and even hairpieces, the same official said.

One Russian tactic is sending a large number of people, including just one or two intelligence officers, streaming out of a diplomatic mission at once, making it harder for the FBI to decide whom to follow, said a former U.S. intelligence officer, also speaking on the condition of anonymity.

Microsoft Corp. was one target of the Russian espionage operation in Seattle, U.S. officials familiar with the expulsions said. One goal was identifying targets for recruitment in the company’s coding operations because the company’s products are used in so many applications, they said.

In 2010, Alexey Karetnikov, a 23-year-old Russian spy who had worked at testing computer code in Microsoft’s Richmond, Wash., headquarters, was deported by an immigration judge.

Several of the officials traced the Kremlin’s more aggressive spying approach to Putin’s 2012 return to the presidency, and Moscow’s 2014 seizure of Crimea and intervention in eastern Ukraine.

“We observed a commensurate uptick in Russian intelligence and espionage activity in the U.S. and across Europe, although few analysts connected the dots,” said Heather Conley, a former State Department official now at the Center for Strategic and International Studies think tank.

Michael Rochford, a former FBI chief for espionage, said the mass expulsion of suspected spies posing as diplomats will affect Russia’s security services and dent morale at their Moscow headquarters.

After past expulsions, he said, Russian spies have handed their operations over to officers who remain behind, or to “illegals” – long-term agents with no demonstrable connections to the Russian government.

The risk, he said, is that when Moscow replaces the expelled personnel, it will not be clear who the new spies are.

“Sometimes it’s better to know who they are and follow them,” he said.