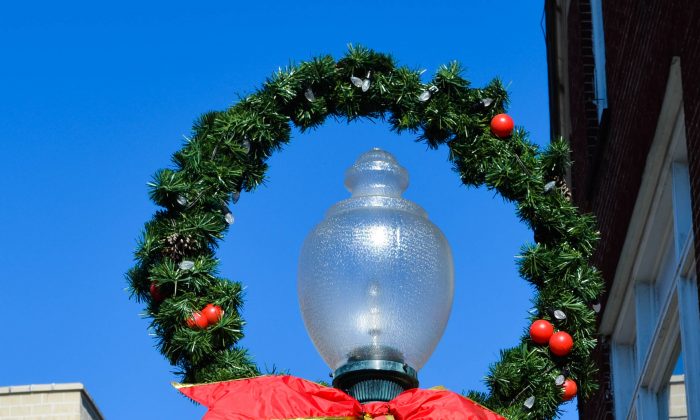 MIDDLETOWN—The city of Middletown wants to bring people to the heart of downtown for the Christmas shopping season and has planned a series of events to do just that. “Heart of Downtown” will feature over several days the lighting of the city’s Christmas tree, a parade, free movies, a concert, and a holiday photo contest sponsored by Epoch Times.

The city’s Christmas tree will arrive at Festival Square on Nov. 10, a gift of a family near Scotchtown. Wreaths on streets lights will be lit during evening hours. Stores will stay open later.

For the 18th year, the day after Thanksgiving kicks off the downtown shopping season and the occasion will be marked by a parade. Past years have seen up to 1000 merrymakers watch the parade go down Main Street.

You come downtown, you get a bite to eat, you shop, you can see a movie.
— Maria Bruni, Middletown Director of Community and Economic Development

The parade lines up at Garcia’s Supermarket with the Marching Middies, the Maybrook Boy Scout Troop and, of course, Santa. The Middletown football team will join the event with the Erie Bell they recently won for the second year. Santa will officiate at the tree lighting with the donors of the tree.

After the tree lighting, people can enjoy a free movie at the Paramount—”It’s a Wonderful Life.” It’s been a fun event attended by between 600 to 800 in past years. The next day, Middletown Director of Community and Economic Development, Maria Bruni, said there will be another free movie—”How the Grinch Stole Christmas.”

Meanwhile, during the day, Santa will be appearing at shops all over town.

A week later, on Dec. 5, there will be a concert by the Grammy-award-winning Jimmy Sturr.

This season people can enter the Epoch Heart of Downtown photo contest in several categories such as “Cutest Kid,” “Here’s Santa,” “Holiday Cheer,” and “Best Downtown Selfie.” Winners will be announced on Dec. 5 in a ceremony at Festival Square (see sidebar for details), after the concert.

Bruni says there are many unique shops and eateries downtown. “You come downtown, you get a bite to eat, you shop, you can see a movie. You can walk around and see the holiday decorations.”

Bruni said around 115 retail shops are spread throughout the downtown district. Middletown was one of the first cities to create a mixed use zoning for the downtown which has residential units above stores. “A neighborhood has been created. People live here, people work here. There’s that neighborhood feeling.”

“People are down here every day walking down the street. They shop in the stores. It’s not a deserted spot,” Bruni said.

John Degnan, executive director of the Downtown Middletown Business Improvement District, said the makeup of the downtown has changed. “People now want to work, live, and play in the downtown.”

“We want people to come downtown and experience how safe it is, how clean it is,” Bruni said. Several stores make the downtown a destination for the holidays. Havana Cigar Lounge offers gift certificates to anyone looking for a gift for that cigar smoker. While a wife is shopping, a husband can hang out at the cigar lounge enjoying a smoke.

“The ladies want to shop for their husbands who do smoke. So they get gift cards and let [the husbands] deal with it,” says owner Cisco Velez.

Velez manufactures his own line of cigars. “We can cater any specific style, size, or strength that the customer may want and have it for them on a weekly or monthly basis, however they might wish.”

A hardware store that has been around for 125 years must have something going for it. Ayres & Galloway owner Tom Foley serves customers, businesses, and even larger industrial concerns in a store full of history. He says his prices are competitive for residents in the area. During the Christmas season, the window usually shows trains and lots of lights.

“Basically we have the whole kit to put everything together,” Garcia says. His supermarket does free deliveries and, the ultimate in customer service, will pay for a customer’s transportation home with groceries. If a shopper wants a change of pace for dinner, a stop at Garcia’s can be the ticket.

Middletown’s downtown district offers an ambience and fun not available in a mall or big box store. Shoppers can enjoy the sights and sounds of the season during the many events and unique shops and cafés. “We give the downtown a festive feel,” Bruni says.

Degnan says, “We’ve come a long way.” He says the downtown during the 2015 holiday season will delight every member of the family.