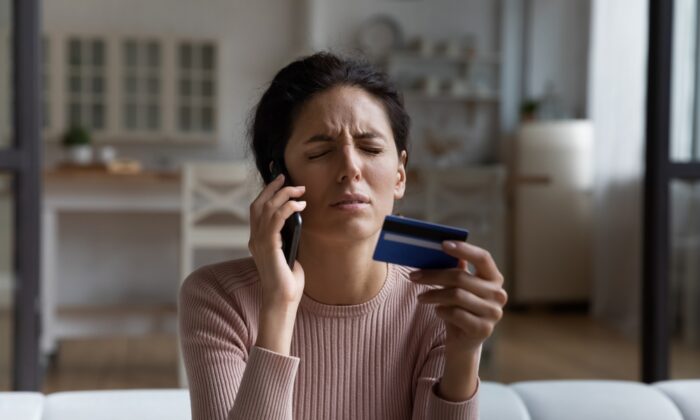 At her lowest point, the author made a promise: "I would pay back all of the debt no matter how long it took or what I had to do, if I could only keep my family and my home." (fizkes/Shutterstock)
Economy

Feel the Squeeze: Higher Rates, Inflation to Weigh on US Borrowers, Experts Warn

The Federal Reserve has raised interest rates for the first time since 2018, with six more rate hikes planned for 2022. The central bank’s tightening could have a considerable effect on U.S. borrowers and consumer spending trends moving forward, experts say.

U.S. consumers could be challenged by a broad array of “brisk headwinds that only seem set to intensify” in the coming months, according to Scott Anderson, chief economist at Bank of the West.

Consumers are beginning to adapt to the current environment of 40-year high inflation, higher interest rates for credit, and financial volatility by trimming a portion of their spending on specific goods.

“The downward trend in consumer spending growth is already clear, and the risks to this forecast are more heavily weighted to the downside than the upside in my opinion,” Anderson wrote in a report. “Aggressive Fed rate hikes and balance sheet reduction will soon join the list of headwinds for the consumer, and financial markets will increasingly take notice that the Powell ‘Put’ is no more.”

Surveys show that rising gasoline prices are beginning to take their toll on consumer patterns as well.

More Americans reported that they’ll trim outlays on restaurant meals and trips to the movies if gas prices keep rising, according to a Reuters/Ipsos poll earlier this month.

But pent-up savings could cushion the blows of rate normalization efforts and rampant price inflation, according to analysts. When the national economy shut down and Americans stayed home during the COVID-19 pandemic, U.S. households accumulated $2.7 trillion in crisis savings, representing 13 percent of the country’s gross domestic product, TD Economics noted.

In Debt We Trust?

But while economists and market analysts monitor the effect on spending habits, other financial experts are sounding the alarm on the effect higher rates will have on borrowers with mortgages, automobile loans, and credit cards.

Last week, the central bank lifted the federal funds rate by 25 basis points to a target range of 0.5 percent. This is the interest rate that banks borrow and lend to each other overnight. It isn’t the rate that consumers face, but the decision still has broader implications on borrowing and saving rates in the everyday economy.

Banks look to the fed funds rate as a barometer for how they establish their prime rate. So, as a result of a quarter-point increase, credit experts anticipate that a credit card interest rate will likely jump 0.25 percent in the next billing cycle.

The cost of existing credit card debt is forecast to rise as much as $3.2 billion in 2022 following the Fed’s move on rates, WalletHub estimated in a new report.

The personal finance website also projected that the average APR on a 48-month new auto loan would increase by roughly 16 basis points in the next few months.

Private student loans are expected to be costlier amid higher interest rates. This could prompt borrowers to refinance these loans before the Fed raises rates more.

Mortgage rates have already been on the rise since they typically respond to the economy, inflation, and demand. Home loan rates aren’t directly influenced by the Fed’s actions on the benchmark rate, but tighter monetary policy affects the 10-year Treasury yield. This bond affects mortgage rates.

So far in 2022, the 30-year mortgage rate climbed from 3.52 percent to 4.27 percent, according to the Mortgage Bankers Association (MBA).

Industry observers are urging borrowers to be prepared for higher servicing costs for a home equity line of credit (HELOC) or an adjustable-rate mortgage.

Although some suggest that higher rates will douse the red-hot housing market, Greg McBride, Bankrate’s chief financial analyst, is urging prospective homeowners not to get their hopes up.

“More than a decade of chronic underbuilding and millions of millennials moving into the homebuying stage of life have created a significant imbalance between housing supply and demand,” McBride wrote in a report.

“While rapidly rising mortgage rates may temper the demand somewhat, don’t expect home price appreciation to come to a halt. A more modest pace of appreciation is the likelier outcome.”

Businesses could take a hit as well. In addition to higher rates for business lines of credit and variable-rate loans, lenders will engage in greater scrutiny, making it harder for small business owners to receive new funding.

According to the latest Federal Reserve Bank of New York’s (FRBNY) Survey of Consumer Expectations, U.S. consumers believe that future credit availability will diminish substantially. More respondents think it will be harder to attain credit.

Whether the rising-rate landscape will have an effect on households’ financial situations or not remains to be seen. But the monthly report shows that a larger share of survey participants expects their financial conditions to deteriorate at a time when more people have taken on immense levels of debt.

“The total increase in nominal debt during 2021 was the largest we have seen since 2007,” Wilbert van der Klaauw, senior vice president at the New York Fed, said in a statement. “The aggregate balances of newly opened mortgage and auto loans sharply increased in 2021, corresponding to increases in home and car prices.”