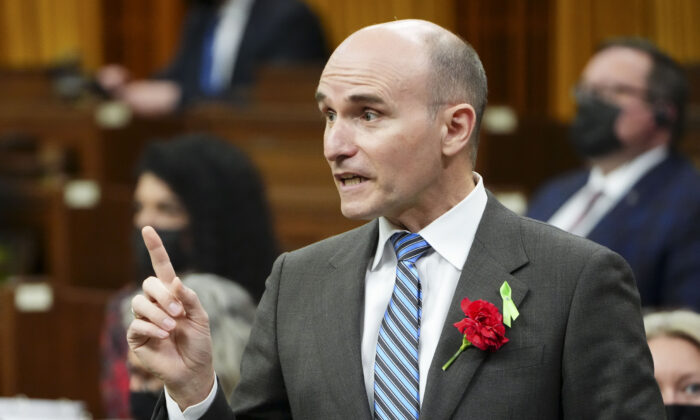 Health Minister Jean-Yves Duclos speaks during question period in the House of Commons on Parliament Hill in Ottawa on May 6, 2022. (The Canadian Press/Sean Kilpatrick)
Canada

Duclos made the announcement on Sept. 1 during an update on Health Canada’s approval of a new COVID-19 vaccine from Moderna that targets both the original strain of the novel coronavirus and the specific Omicron variant, called bivalent vaccines.

Duclos said the booster campaign will be “a big team effort.”

“This is obviously a national campaign,” he said.

“We know that provinces and territories will continue to increase their efforts at reaching people, speaking in terms that inform and sometimes reassure them.”

A January study by Statistics Canada found that about half of Canadians (56 percent) were hesitant to get a third vaccine dose, citing concerns over long-term side effects.

In a June 14 press conference, Duclos had mentioned transitioning from the definition of “fully vaccinated” to being “up-to-date” with COVID-19 shots, saying two shots didn’t provide enough protection.

Chief public health officer Dr. Theresa Tam said at today’s press conference that eligible Canadians should get a booster “if it’s been longer than six months” since their last dose.

“I think the message is get ‘up-to-date,’ get your booster if you haven’t had anything in terms of vaccination or infection in the last six months,” she said.

Shipments of the bivalent vaccine are expected to arrive in the next few days, and there will be enough supply for all Canadians 18 and older to get a dose this fall and winter, health officials said.

The newly-approved Moderna bivalent vaccine is designed to react to mutations of the Omicron BA.1 subvariant—which makes up 0.1 percent of the virus currently circulating in Canada.

The Omicron BA.5 and BA.4 are most prevalent in Canada right now, with the former making up 82 percent of COVID-19 cases and the latter accounting for around 12 percent, according to government statistics.

Tam said that the new bivalent vaccine is effective against the most recent and dominant variants despite a lack of “real-world” data to support it.

“We do not know what the real-world impact is because that is not available,” Tam said, but added that clinical trials of the new Moderna vaccine show a “significant” antibody boost.

Canada’s approval of the bivalent vaccine comes just a day after the U.S. Food and Drug Administration (FDA) approved emergency-use authorization to Moderna and Pfizer for their newly-modified booster vaccines, despite a lack of clinical trial data supporting their efficacy.

The Canadian Press and Zachary Stieber contributed to this report.