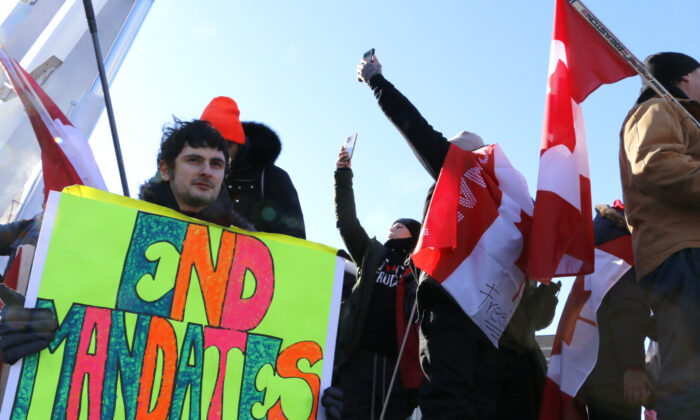 The federal government has put a number on how many Canadians it believes will decline to receive a COVID-19 injection even if pressured, according to a recently declassified briefing to cabinet.

“[Seven] to 9 percent of the population does not intend to be vaccinated and are unlikely to be swayed by mandates,” says the heavily redacted briefing filed as evidence as part of the lawsuits challenging the travel vaccine mandate.

The briefing doesn’t indicate how the government came to the 7 to 9 percent figure, but it provides other polling metrics on popular support for mandates from survey firm EKOS.

Over 85 percent of the total Canadian population has received at least one dose of a COVID-19 vaccine, according to Health Canada.

The briefing was provided to cabinet sometime in June before the government suspended the vaccination requirement for domestic and outbound travel on June 20. It contains data and recommendations about the way forward with the mandates in transportation, within the federally regulated workforce, and at the border.

According to a document attached to the briefing and signed by Neil McCraw, counsel for the Privy Council Office, the briefing came from Transport Minister Omar Alghabra and Treasury Board President Mona Fortier.

The briefing was obtained by attorneys representing the applicants in the travel mandate lawsuits after a government witness claimed “cabinet confidence” during her cross-examination in early June.

Jennifer Little, director general of the COVID Recovery Team at Transport Canada, wrote her department’s mandate policy and was asked by a lawyer if her team had made recommendations to senior decision-makers about modifying the travel vaccine mandate.

Little said she was not at liberty to say, which led to the challengers asking for internal documents about those recommendations.

According to the briefing to cabinet, there were three objectives to implement vaccine mandates: prevent transmission and infection among travellers and employees of the transportation sector, “improve vaccine uptake in the general public,” and “play a leadership role in protecting the health” of Canadians.

The government says the federal and provincial mandates were successful, leading to an increase of 5 to 8 percent in first-dose uptake.

“Estimates suggest that mandates led to about 790,000 additional first-dose vaccinations in Canada as of Oct. 31, 2021,” says the briefing.

“The decision to implement vaccination mandates proved to be a sound one, and their objectives were successfully achieved.”

As a gauge of success, the briefing notes the vaccination rates in different sectors: 98 percent in the public service, 94 percent in the federally regulated transportation sectors, and 81 percent among Canadians.

The government knew in late December–early January that a primary series of COVID-19 shots provided limited and waning protection against infection from the virus SARS-CoV-2, particularly against the new variant Omicron at the time.

That level of protection made the first of the three objectives, that of preventing transmission and infection, no longer achievable.

Along with the information that a segment of the population will not be “swayed” by mandates and that vaccination provides limited and waning protection against infection, the briefing presented some options to cabinet ministers about the way forward with the mandates in place at the time.

At the June 14 press conference when the government announced the suspension of the mandates, Health Minister Jean-Yves Duclos mentioned transitioning from the definition of “fully vaccinated” to being “up-to-date” with COVID-19 shots, since he said two shots aren’t good enough anymore.

The briefing slide “Options for the Transition to Up-to-Date Vaccination” presented four different courses of action.

This would have likely been complicated given the statistically lower interest in booster shots and some individuals now receiving fourth and fifth doses while others hadn’t received a third.

“Making the existing federal mandates stricter would show that the Government is doing everything it can to drive vaccine uptake,” says the briefing about this option. Other following explanations were redacted for solicitor-client privilege (SCP).

The second option proposed involved temporarily suspending the public service and transport mandates while transitioning to an “up-to-date” mandate for travellers at international borders.

The initial sentences of the explanation were redacted for SCP. The information that remains visible shows that the Canada Border Services Agency (CBSA) and the Public Health Agency of Canada (PHAC) anticipate “significant operational challenges” with the vaccine mandate due to increased processing time and enforcement actions at the border.

The third option is the one that was adopted and came into force on June 20.

It says the mandates would be only “temporarily” suspended and brought back in the fall with an “up-to-date” vaccination requirement if “health conditions warrant.”

The briefing says this “preserves the option to move more aggressively in the fall if necessary, based on evolving scientific and epidemiological data (helps maintain confidence the government is guided by the latest science).”

This option also mentions what appears to be the name used by the federal government to describe its push for mass vaccination: “Big Lift 2.0.”

It says the option “shifts the focus to—and relies more heavily on—Big Lift 2.0 vaccination strategy to drive increased booster uptake by Canadians by the fall.” The rest of the recommendation is redacted for SCP.

The fourth option presented in the briefing was maintaining the status quo and focusing on a voluntary campaign to stay “up-to-date” with vaccination.

Part of the explanation for this option says to “leave the mandates as they currently are” while the rest is redacted for SCP.

Duclos announced on Sept. 1 the start of a new campaign to encourage people to get “up-to-date” with their shots.

The challenge to the travel vaccine mandate in the Federal Court by four separate lawsuits has produced many revelations about the ins and outs of the underlying policy.

Despite Liberal ministers saying they were following public health advice and science when imposing the mandates, Transport Canada official Jennifer Little said she had no recollection of health officials recommending them.

Little also said she had not considered the ethics of imposing a mandate, nor had she consulted PHAC’s ethical framework for guiding pandemic policies.

PHAC epidemiologist Dr. Lisa Waddell said during her cross-examination in late May that the travel mandate was backed by limited data on in-flight transmission and that the government itself had not conducted an independent study on the issue.

Dr. Celia Lourenco, director general of the Biologic and Radiopharmaceutical Drugs Directorate within Health Canada’s Health Products and Food Branch, said during her cross-examination in early June that if the COVID-19 vaccines had shown their current efficacy of below 50 percent in clinical trials, they would not have been authorized. Lourenco is the official who has final authority to authorize vaccines in Canada.