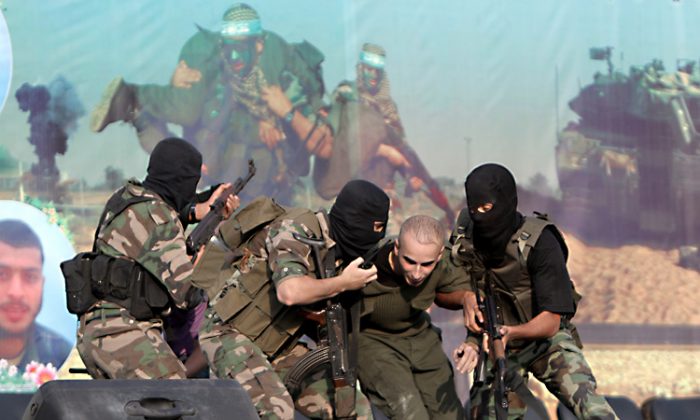 Palestinian militants with the Ezzedine Al-Qassam Brigades, the armed wing of the Islamist movement Hamas, simulate the kidnapping of Israeli soldier on Oct. 28. Hamas recently declared that computer hacking is the “new field of resistance.” (Said Khatib/Getty Images)
News

One of the first major battles of cyberterrorism is taking place between Israeli, Iranian, and Saudi Arabian hackers who are dumping credit card data belonging to innocent bystanders by the tens of thousands.

The impact of the attacks on each nation’s financial infrastructure spurred Israel to announce on Jan. 7 that the cyberattacks would be treated the same as terrorism. Not long after, terrorist group Hamas announced that hacking is the “new field of resistance,” in an e-mail sent to reporters in the Gaza Strip, The Jerusalem Post reported.

The U.S. government is now bracing itself as terrorist threats move from physical attacks to computers—connecting every home, government office, and military network in the world.

The threat has been warned of for years—by military and hackers alike—but now the time has arrived, and the world is unprepared.

“Never has there been, in my almost 49-year career in intelligence, a more complex and interdependent array of challenges than that we face today,” said Director of National Intelligence, James Clapper during the Worldwide Threat Assessment to the Senate Committee on Intelligence on Jan. 31, according to a transcript.

“We foresee a cyber environment in which emerging technologies are developed and implemented before security responses can be put in place,” Director of National Intelligence James Clapper said.

The threat goes beyond just state actors, among which Clapper said China and Russia stealing U.S. data is a main concern, and stretches into a growing segment of small groups. Clapper said the Web gives “easy access to potentially disruptive and even lethal technology and know-how by such groups.”

FBI director Robert Mueller voiced similar concerns. He said “down the road, the cyber threat, which cuts across all programs, will be the number one threat to the country.”

The FBI is preparing for this. Mueller said there are three main points the agency is focusing on: changing their organizational structure, recruiting and hiring cybersecurity experts, and understanding their role to investigate and prevent intrusions.

The digital infrastructure is incredibly insecure, and hacker groups, including Anonymous Operations and TeamPoison, have made a show of this—with attacks taking place nearly every day against police, government networks, or major corporations.

But the concern of cyberterrorism stretches much deeper than this. The real threat are the hackers who do not announce their attacks, and maintain access to steal data and harm systems for as long as they can.

LulzSec is known for attacks on websites, including PBS, Sony, the FBI, CIA, and others. The hacker group that was launching attacks against high profile targets almost daily in 2011 summed up the threat, in an ominous June 27 statement.