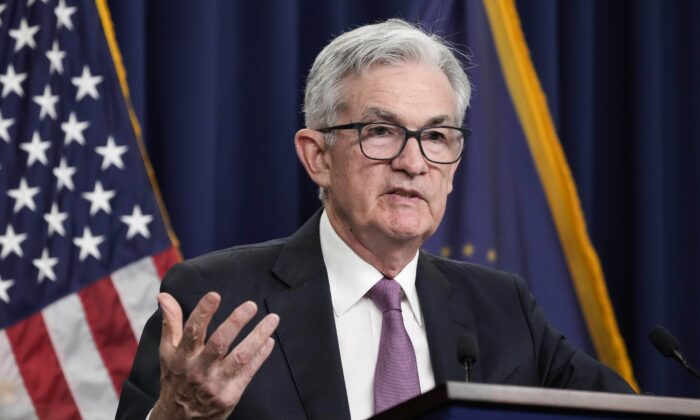 The Federal Reserve will use its tools “forcefully” to attack the 40-year high level of inflation by continuing to tighten monetary policy “for some time,” Federal Reserve Chairman Jerome Powell said at a central banking conference, on Aug. 26, at which he struck a hawkish tone that sent stocks tumbling.

Powell, in his long-awaited remarks at the annual event in Jackson Hole, Wyoming, said that higher interest rates will mean “slower growth,” “softer labor market conditions,” and “some pain for households and businesses.”

He warned that there is no quick cure for high inflation, saying that “the historical record cautions strongly against prematurely loosening policy.”

Wall Street assessed the implications of a continued higher interest rate policy after Powell stated that he and his colleagues at the Fed would stick with their tough stance against inflation and that the central bank will not be swayed at this time by a month or two of data.

Fed policymakers have repeatedly said they need to curb demand for goods and services by raising borrowing costs in order to make it harder to finance homes, cars, and businesses, in their efforts to quell inflation.

As the Fed’s plan to slow the economy kicks in, companies, particularly in the housing market, will have to adjust their hiring plans or even resort to layoffs.

After four consecutive interest-rate increases totaling 2.25–2.50 percentage points, Powell said this is “no place to stop or pause,” and that the current benchmark rate is at a level that neither simulates or restricts growth.

“Reducing inflation is likely to require a sustained period of below-trend growth. Moreover, there will very likely be some softening of labor market conditions,” said Powell.

“These are the unfortunate costs of reducing inflation, but a failure to restore price stability would mean far greater pain.”

The chairman’s remarks come after inflation stabilized in July, with some analysts predicting that it may have peaked, but there were no signs of any decline.

Powell told investors not to expect the central bank to pull back anytime soon from raising rates until the inflation problem is fixed and that they must deal with the pain as it increases.

“Restoring price stability will likely require maintaining a restrictive policy stance for some time,” said Powell, who explained that the continued move toward higher rates was based on precedent, referring to the early 1980s, when then-Fed Chair Paul Volcker pulled the economy into recession to tame inflation.

“A lengthy period of very restrictive monetary policy was ultimately needed to stem the high inflation and start the process of getting inflation down to the low and stable levels that were the norm until the spring of last year,” said Powell, referring to the 1980s.

Powell noted that the Fed’s failure to act forcefully in the 1970s led to the extremely high inflation, which in turn led Volcker to massively push up interest rates to restore stability to the economy.

“Our aim is to avoid that outcome by acting with resolve now.”

The markets soon dipped after the Fed chair’s comments.

Communication services and tech, for example, were hit hard in the benchmark S&P 500 Index, as investors expressed concern over the likelihood of higher interest rates.

At the time of writing, the Dow Jones Industrial Average had dropped 407 points, or 1.22 percent, while the S&P 500 fell 1.5 percent, and the Nasdaq Composite slid 1.84 percent.

Some investors were hoping for a change in the Fed’s interest-rate policy, with a few predicting a change in direction if unemployment rises too fast, along with possible cuts in interest rates next year. But Fed officials lately have pushed back hard against that notion.

“After all the Fed speakers were so hawkish the past few weeks, why would the market be surprised when Powell reiterated what every Fed speaker has said? Nobody expected a pivot at Jackson Hole,” wrote Gary Black, managing partner, The Future Fund LLC, in a tweet.

The latest data from the Personal Consumption Expenditures index, one of the Fed’s favorite inflation measures, fell 6.3 percent on an annual basis, from 6.8 percent in June, while the Consumer Price Index also showed similar price declines.

Economists were largely satisfied by the two July readings, as prices declined primarily owing to a steep drop in energy costs.

Meanwhile, other areas of the economy are showing signs of slowing down, such as the housing market, which is showing a steep and rapid decline.

Job Market “Clearly Out of Balance”

Economists also expect that the massive surge in hiring over the past year and a half will likely start to cool soon, and there are also fears that energy costs will surge again toward the end of the year.

The U.S. unemployment rate is currently at 3.5 percent, the lowest level in more than 50 years.

Powell noted that the job market is “clearly out of balance,” as open job positions currently exceed that of the number of the unemployed.

The economy has dealt with two consecutive quarters of negative GDP growth, which falls within the commonly held definition of a recession, which Powell denied and who believes that the underlying economy is still strong, but slowing.

Powell said that the Fed will persist at moving ahead with its policy until inflation falls closer to its 2 percent inflation target.

“We are moving our policy stance purposefully to a level that will be sufficiently restrictive to return inflation to 2 percent,” he said.

Markets are now awaiting the Fed’s next policy rate meeting on September 20–21, when the Federal Open Market Committee (FOMC) is expected to announce a third consecutive 75 basis-point increase, or possibly 50 basis points.

Powell said the decision “will depend on the totality of the incoming data and the evolving outlook. At some point, as the stance of monetary policy tightens further, it likely will become appropriate to slow the pace of increases.”

“A single month’s improvement falls far short of what the committee will need to see before we are confident that inflation is moving down,” he said, referring to the FOMC meeting.

However, they continued to reflect the expectation that the Fed’s benchmark overnight interest rate would hit a range of 3.75–4.00 percent at the start of the second quarter of 2023 and which would gradually fall by the start of the fourth quarter.

Powell “did what he needed to do,” said former Treasury Secretary Larry Summers, to Bloomberg TV in reaction to the Fed chair’s comments at the Jackson Hole symposium, and who has been a major critic of Powell.