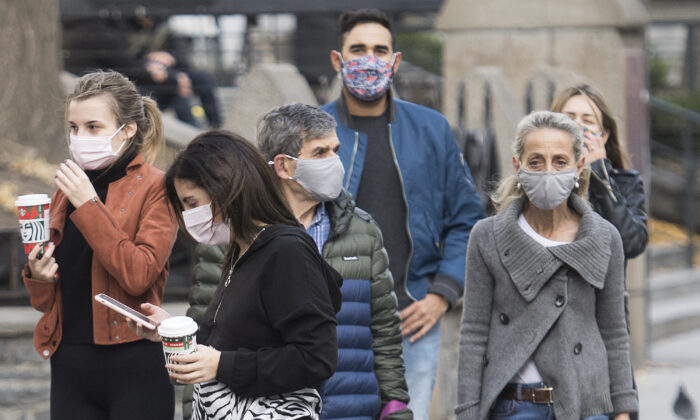 People wear face masks as they walk along a street in Montreal on Nov. 7, 2020, as the COVID-19 pandemic picks up steam. (The Canadian Press/Graham Hughes)
Canada

The federal government may soon be called upon to provide even more support to households and businesses as the threat of further lockdowns grows to curtail the COVID-19 spread and ease the burden on hospitals. By some metrics, Ottawa has already done more than all its peers, though analysts suggest the support has been inefficient and needs to be more targeted going forward.

During the first wave of the pandemic, the feds proved to be bountiful in their support of households as they got money out the door as quickly as they could. But now, given how certain business sectors are suffering, calls are coming for more specific aid that would address acute problems, look to rebuild the economy’s productive capacity, and avoid wasteful spending and more long-term fiscal damage.

“This extreme generosity of the government—provided across the board, support to the household sector—contrasts markedly with its approach to the business sector, which is very tight-fisted, very suspicious, in very limited support,” Philip Cross, former chief economic analyst at Statistics Canada and Macdonald-Laurier Institute senior fellow, told The Epoch Times.

“So I think there’s a major imbalance there, which I think might be politically popular but is not good for our economy at all.”

Cross said Ottawa should have understood that certain industries would be acutely affected by the pandemic, such as airlines, accommodation, and food services, while other industries are more able to adapt.

“We started to figure this out pretty quickly, but yet we continue to provide across-the-board relief—income relief,” he said.

Trevin Stratton, chief economist at the Canadian Chamber of Commerce, also said targeted support for the most severely affected businesses and individuals should be the principle behind a second wave of federal aid.

“Let’s make sure federal spending is focused on quality over quantity,” he said in a Nov. 13 statement, adding that the return on investment must be looked at carefully with an eye on economic growth.

The International Monetary Fund (IMF) estimates that Canada’s budget deficit as a percent of the gross domestic product (GDP), at 19.9 percent, will be the largest among 35 high-income countries in 2020. The feds last estimated that deficit to be $343.2 billion when they delivered their fiscal update in July.

The Bank of Canada’s balance sheet has swelled significantly since it started funding the government’s borrowing to pay for various pandemic relief measures. Here too, Canada has done more than the United States.

From another perspective, the Organisation for Economic Co-operation and Development (OECD) just reported that while most countries saw drops in household disposable income and economic growth in the second quarter, Canada and the United States saw household income per capita rise by 11.0 percent and 10.1 percent respectively.

But Canada’s rise is clearly the outlier among the OECD’s seven major nations. The U.S. increase is deemed less noteworthy since its Bureau of Economic Analysis has already reported a 4.4 percent decline in real disposable personal income for the third quarter.

Canada Unusual in Delay in Offering Bailout for Airlines

And Canadians have been saving at unprecedented rates in the first half of 2020, according to the Fraser Institute. This behaviour is expected to be temporary, but it’s partly due to uncertainty about future employment and economic prospects, and also because people are spending more cautiously.

“That’s a clear sign that a lot of households were getting money that they didn’t need,” Cross said.

An undesirable consequence of this government largesse may be that some people won’t be too motivated to get back into the workforce.

“One just hopes that we’re not sending out the message to people that this is going to be how you should behave on an ongoing basis,” Cross said.

Employment dynamics coming out of the pandemic will be telling to observe to see how the labour force participation rate evolves.

The feds have purchased nearly 10 doses of vaccine for every person in the country—nearly double the next highest purchases, by Australia and Britain, which have spent enough for just over 5 doses per capita, according to The Economist.

As of Sept. 22, Canada had spent $1 billion on five vaccine agreements, but polls show that a good portion of Canadians aren’t interested in taking one.

A survey by Léger and the Association for Canadian Studies published Nov. 17 showed that 22 percent of respondents in an online poll said they would not take the new Pfizer vaccine just announced that could be ready in April 2021. And 21 percent said the vaccine’s expected 90 percent efficiency—it would adequately protect 9 out of 10 recipients—is not sufficient for them to take it.

An Angus Reid survey published Oct. 2 showed that just 39 percent of Canadians would seek to be vaccinated as soon as a vaccine was widely available. Another 38 percent said they’d wait before taking a vaccine.

“Wouldn’t be entirely surprising that the rest of the world is noticing that we’re willing to spend with no questions asked. Somebody’s going to take advantage of this,” Cross said.

The Time Is Now

It will be harder for Canada to grow itself out of a debt hole like it did after World War II. The Bank of Canada’s senior deputy governor Carolyn Wilkins in a speech on Nov. 12 said the central bank has downgraded Canada’s potential output growth from around 1.8 percent to a bit less than 1 percent. The potential output is an estimate of what the economy can produce if it’s running at full capacity, and it depends on capital, the workforce, and productivity.

There’s a need to boost productivity now more than ever, Wilkins said. She suggested policies and investments that generate a long-term return like investing in education, infrastructure, and technology.

“Strong, sustainable growth would also help us to manage the heavy debt load that has piled up over the last decade and will continue to do so because of COVID-19,” she said.

The government announced Nov. 13 that it will give $1.5 billion to the provinces and territories for retraining laid-off workers for new jobs.