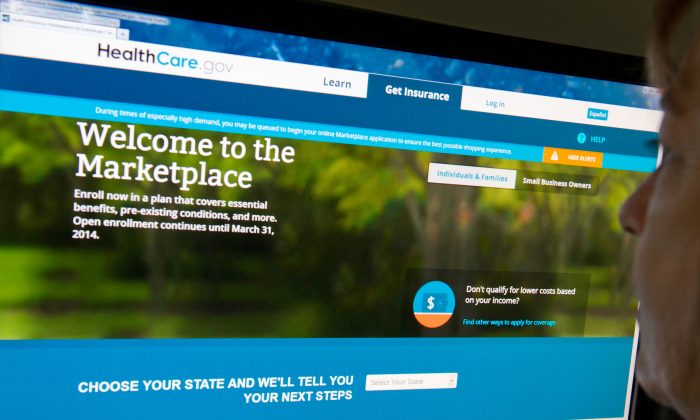 The Centers for Medicare & Medicaid Services (CMS) is advising states on how to provide more affordable health care options for people who don’t qualify for government aid.

The advice deals with a lack of federal funding for silver-level plans sold on the exchanges that likely has contributed to an increase in premiums for all plans.

Under the Affordable Care Act, also known as Obamacare, the federal government set up a subsidy for out-of-pocket medical costs, called cost-sharing revenue (CSR). To be eligible for CSR, a person had to make between 100 and 250 percent of the federal poverty level, and had to purchase a silver-level individual plan on an exchange.

In fiscal year 2017, the federal government spent about $9 billion on these cost-sharing revenue payments, according to the Congressional Budget Office. By 2026, it estimates the cost will balloon to $130 billion.

Starting last October, the funding for CSR payments was cut after the Department of Justice determined that the way the program was being funded was not in line with budgetary statutes.

Without these government subsidies, health insurers took a variety of approaches to make up for the difference.

Premiums for almost all individual plans have been going up steadily in the past few years. The Department of Health and Human Services (HHS) estimated that in 2018, a 27-year-old paid about 37 percent more in premiums on the second-lowest-cost silver plan than in 2017. In real money terms, that’s a jump to $411 from $300.

However, those who are subsidized saw their premiums go down this year compared to last, with premium tax credits covering on average 86 percent of the cost. The government subsidizes premiums for people who make 100 to 400 percent of the federal poverty level, which applies to about 83 percent of all people who signed up during the 2018 open enrollment period. The average premium for people who received a tax credit was $89 this year, according to HHS.

At the beginning of August, the department sent out a letter advising states on how to deal with the premium spikes for individuals who didn’t receive any assistance, those who made above $48,560, or a family of four that made above $100,400.

It urged states to allow insurers to offer another plan off the exchanges that didn’t include the added costs for the lost cost-sharing revenue payments but that was similar to the silver-level plan offered on the exchange.

Because federal law doesn’t allow an insurer to offer different premium rates for the same plan on and off the exchanges, the insurer would have to create another plan that is similar, but not the same, as the silver-level plans offered on the exchange, a strategy that some states have employed.

“The guidance is helpful, as it makes clear that, in the absence of CSR funding, states may apply the CSR load to on-exchange plans only,” Kris Haltmeyer, vice president of legislative and regulatory policy for Blue Cross Blue Shield, said in an emailed statement. “This strategy will help make coverage more affordable for those who do not receive tax credits.”

Reinsurance is another tool that several states have adopted to try to hold down costs. In theory, reinsurance programs enable insurance companies to get government funding for their most costly patients while keeping premiums from rising for others.

Alaska passed legislation for such a program in 2016, but it’s not funding it alone. The federal government has agreed to pay $58 million this year, and possibly $322.6 million over five years.

Minnesota implemented a similar program in 2017 and allocated $271 million a year for the program through 2019. The state estimates that it’s kept premiums 20 percent lower than if the program hadn’t existed.

But the fate of these types of programs is uncertain. President Donald Trump has made it clear he wants to repeal the ACA and replace it with more free-market alternatives that drive down prices through promoting competition. So far, however, the Republican-controlled Congress hasn’t cobbled together the votes to repeal the ACA.

In place of action from Congress, HHS has been working to offer alternatives to those suffering from increasing premiums. It recently expanded short-term, limited duration health plans from three months to just under a year, with the option to renew twice.

Those programs aren’t required to comply with the ACA rules, which means they cover less and have lower premiums.

Critics say these plans will fuel the trend of healthy people leaving the exchanges, driving up costs for the those who remain, and will encourage healthy people to sign up for coverage that may turn costly if they get sick.

HHS Secretary Alex Azar has said these plans are not for everyone, and that the administration has gone “to significant lengths” to let customers know these plans aren’t subject to the same regulations as Obamacare plans.

“Fundamentally, this administration believes in more options, not fewer,” Azar wrote in a Washington Post op-ed. “[This] is just part of President Trump’s larger agenda to improve health-care choice and competition for Americans.”