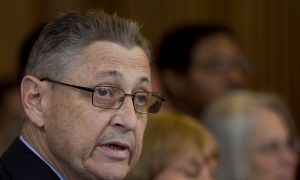 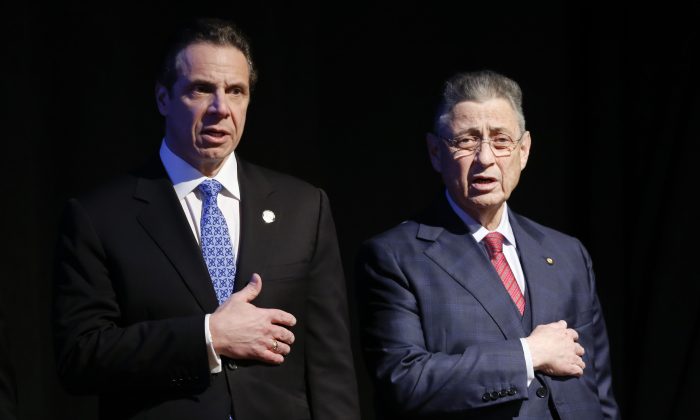 Assembly Speaker Sheldon Silver (D-Manhattan) (R) stands with New York Gov. Andrew Cuomo before Cuomo's State of the State address and executive budget proposal at the Empire State Plaza Convention Center in Albany, N.Y., on Jan. 21, 2015. Silver, who has been one of the most powerful men in Albany for more than two decades, was arrested Thursday on public corruption charges. (AP Photo/Mike Groll)
Crime and Incidents

NEW YORK—New York Assembly Speaker Sheldon Silver was arrested Thursday on corruption charges and accused of using his position as one of the most powerful politicians in Albany to obtain millions of dollars in bribes and kickbacks masked as legitimate income.

The 70-year-old Silver was taken into custody around 8 a.m. at the FBI’s New York City office, FBI spokesman Peter Donald confirmed. Silver faces five counts, including conspiracy and bribery, and the charges carry a potential penalty of 100 years in prison.

In a criminal complaint, authorities said Silver abused his power and “obtained about $4 million in payments characterized as attorney referral fees solely through the corrupt use of his official position.”

“Mr. Silver looks forward to responding to them — in court — and ultimately his full exoneration,” Cohen said in a statement.

Silver was expected to make a court appearance later Thursday.

The arrest sent shock waves through New York’s Capitol as a new legislative session began, and it came just a day after Silver shared the stage with Gov. Andrew Cuomo during his State of the State address.

U.S. Attorney Preet Bharara took over the files of New York’s Moreland anti-corruption commission after Cuomo closed it in April. Bharara said in October that investigations into Albany’s pay-to-play politics are continuing.

The commission and Bharara were looking into lawmakers’ earnings outside their state salaries. Silver’s outside income has long been a subject of discussion and controversy. Last year, he reported making up to $750,000 for legal work, mostly with the trial firm of Weitz & Luxenberg.

When the commission began to investigate public corruption in 2013, including outside income earned by Silver and other state legislators, “Silver took legal action and other steps to prevent the disclosure of such information,” the complaint said.

It noted that Silver publicly accused the commission of abusing its power by engaging “in a fishing expedition to intimidate legislators.”

The complaint said Cuomo disbanded the commission in March only after Silver and his staff played a key role in negotiations in which the Legislature agreed to certain changes to campaign finance reporting requirements and bribery laws.

As speaker of the Democrat-controlled Assembly, Silver is one of the most influential people in New York state government. Along with the Senate majority leader and the governor, he plays a major role in creating state budgets, laws and policies in a system long-criticized in Albany as “three men in a room.”

The Assembly canceled a scheduled Thursday session. Assembly Democrats were supporting Silver and not seeking his resignation as speaker, according to Majority Leader Joe Morelle, who spoke following a nearly two-hour closed door meeting.

He said Silver had the backing of an “overwhelming” number of the chamber’s Democrats.

“We believe he can carry out his duties as speaker,” Morelle said, standing in front of about two dozen fellow lawmakers. “We’re going to stand with him. … We have faith in the speaker.”

Silver has gone toe-to-toe with five New York governors — from the late Mario Cuomo to his son Andrew Cuomo — since early 1994, when he was selected Assembly speaker to replace the ailing Saul Welprin.

Silver was first elected to the Assembly in 1976, representing a district on Manhattan’s Lower East Side, where he was born and still lives with his wife, Rosa. The complaint noted that his total annual salary and compensation is $121,000, plus per diem pay, a car and driver and travel reimbursement.

A graduate of Brooklyn Law School and a practicing attorney, Silver has championed liberal causes in the Legislature, where he has used his position as a powerbroker to support teachers, trial lawyers and civil service unions.

But he has also seen more than his share of corruption and scandal in his chamber. Several Assemblymembers have been hit in recent years with criminal charges ranging from taking bribes to using campaign funds for personal expenses.

In 2003, Silver’s then-counsel, Michael Boxley, was convicted of sexual misconduct. Nine years later, Silver handled a confidential settlement of $103,000 in public funds for two women who said they were sexually harassed by their boss, then-Assemblyman Vito Lopez of Brooklyn. After the details of the settlement went public, the Assembly speaker was criticized for his role. Silver later said the case should have been handled by the ethics committee.

From The Associated Press. AP writer David Klepper in Albany contributed to this story.