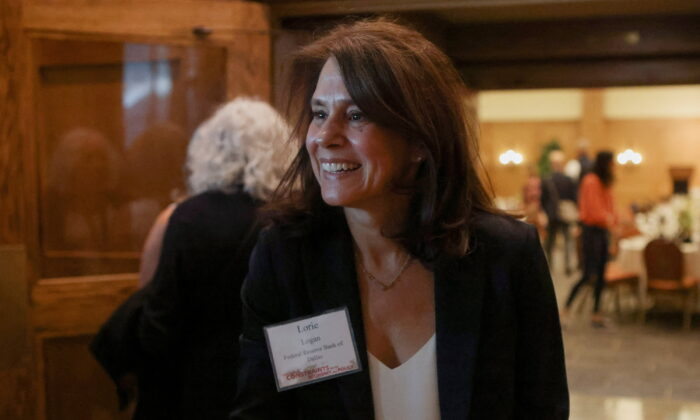 Lorie Logan, president, and CEO of the Federal Reserve Bank of Dallas, attends a dinner program at Grand Teton National Park where financial leaders from around the world are gathering for the Jackson Hole Economic Symposium outside Jackson, Wyo., on Aug. 25, 2022. (Jim Urquhart/Reuters)
Economy

Lorie Logan started her new job as president of the Federal Reserve Bank of Dallas just over a week ago, but on Wednesday lost no time making clear she is ready to jump in alongside her fellow U.S. central bankers to fight inflation.

“Being president of the Dallas Fed and as a policymaker, our number one priority has to be to restore price stability,” Logan said on Wednesday in a virtual event held by the regional Fed bank to introduce her.

The Fed is raising interest rates at a pace not seen since the 1980s to fight inflation that is running at a 40-year high.

Logan was reflecting on the several days she spent last week attending a global central bankers’ conference in Jackson Hole, Wyoming, where Fed Chair Jerome Powell signaled he would raise U.S. borrowing costs as high as needed to cool price pressures, even as he acknowledged that doing so would bring “some pain” to households and businesses as growth slowed and the labor market softened.

“The theme was very clear… the clear priority was bringing inflation down, because it’s having significant implications and hardships for businesses and households,” Logan said. “And that really lines up with my own priority.”

Logan has only been running the Dallas Fed since Monday, but she is no stranger to the U.S. central bank, having most recently been in charge of the New York Fed desk that manages the Fed’s $8 trillion balance sheet and implements the Fed’s interest-rate decisions.

In that role she has attended a number of Fed rate-setting meetings to brief policymakers about developments in the financial sector. On Sept. 20–21 she will attend for the first time as one of 19 Fed officials to discuss the state of the economy and make a decision on how much further to lift the policy rate, now targeted in a range of 2.25 percent–2.5 percent.

Policymakers are expected to weigh at that meeting whether to deliver a third straight 75-basis point rate hike, or to downshift to a smaller half-point hike in light of recent data showing what Atlanta Fed President Raphael Bostic said was “glimmers” of good news in the inflation fight.

Logan did not address anything specific as to how she is leaning as far as September’s decision, or the forward path of interest rates, or even her economic outlook.

“Our goal here at the Dallas Fed is building a stronger economy together,” she said several times during the half-hour program.