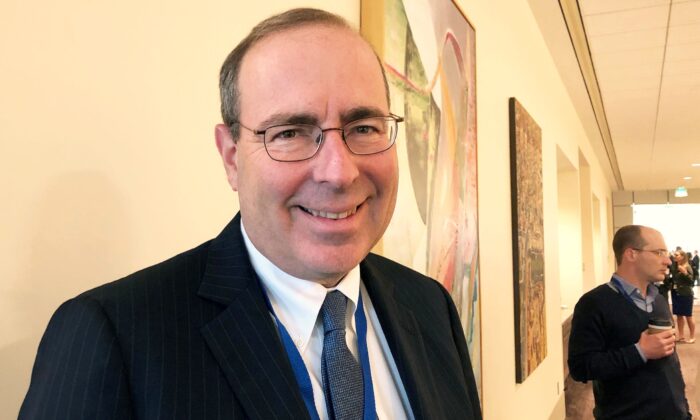 Federal Reserve Bank of Richmond President Thomas Barkin poses during a break at a Dallas Fed conference on technology in Dallas, Texas on May 23, 2019. (Ann Saphir/Reuters)
Economy

Richmond Federal Reserve Bank President Thomas Barkin on Friday said he wants to raise interest rates further to bring inflation under control, and will watch U.S. economic data to decide how big a rate hike to support at the Fed’s next meeting in September.

“I’d like to see a period of sustained inflation under control, and until we do that I think we are just going to have to move rates into restrictive territory,” Barkin told CNBC.

While data this week showing inflation did not accelerate in July was “welcome,” Barkin said, he would want to see inflation running at the Fed’s 2 percent target for “some time” before stopping rate hikes.

“There’s still more to come to get into restrictive territory,” he said.

The Fed has increased its policy rate sharply in recent months, including with two back-to-back 75-basis-point rate hikes in June and July that brought the Fed’s target rate range to 2.25 percent–2.5 percent. Investors currently expect the Fed to downshift to a half-point hike at its meeting next month, although bets in rate-futures markets reflect about a 45 percent chance of a third straight 75-basis point move.

Noting there will be further data on inflation and employment before then, Barkin said he will “make up my mind when we get closer” and wants to see “real” borrowing costs—that is, the cost of money after subtracting out measures of inflation and inflation expectations—move above zero.

A University of Michigan survey released Friday showed one-year-ahead inflation expectations fell this month to a six-month low of 5.0 percent from 5.2 percent, while the survey’s five-year inflation outlook edged up to 3.0 percent from 2.9 percent.

“I think we’re on the brink of moving real rates into positive territory across the curve, we need to sustain it there,” Barkin said. “And we need to follow through on some of the expectations that are out there in terms of rate path in order to keep it there.”

So far the economy is weathering the Fed’s rate hikes well and is fundamentally sound, he said, adding the unemployment rate will likely rise as monetary policy tightens.