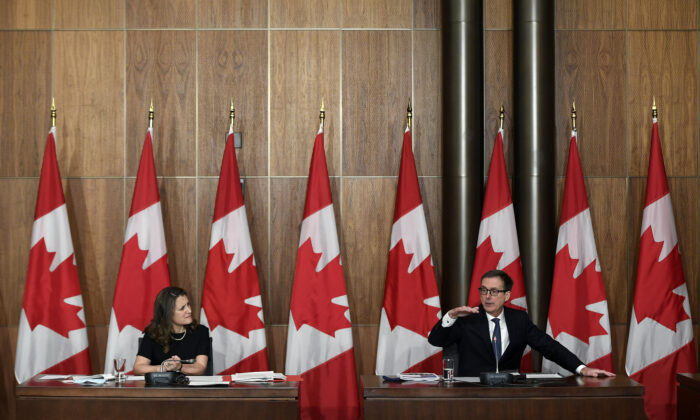 Ottawa says it wants the Bank of Canada to keep doing what it’s been doing—with its primary goal being to maintain low and stable inflation over time, fostering a predictable economic environment. However, the renewal of the central bank’s mandate, stating that policy decisions will now also emphasize “maximum sustainable employment” while noting that this is “not directly measurable,” has brought out skeptics.

“I’m not a great fan of what they put out yesterday. I think the mandate that they had before was very explicit, very clear, well-understood,” Jean-Paul Lam, an economics professor at the University of Waterloo and a former Bank of Canada assistant chief economist, told The Epoch Times.

The feds renewed the BoC’s inflation-targeting mandate for another five years on Dec. 13. The central bank is to target total annual consumer price index (CPI) inflation at the 2 percent midpoint of the 1 to 3 percent target range over the medium term.

Known as “flexible inflation-targeting,” this mandate was adopted in 1991. Since the late 1990s and until 2021, “it has delivered low, stable, and predictable inflation,” said BoC Governor Tiff Macklem at a Dec. 13 joint press conference with Deputy Prime Minister and Finance Minister Chrystia Freeland.

The 2021 renewal effectively formalized a framework for the BoC to be even more flexible in fulfilling its mandate. With the renewal, the central bank technically won’t be able to do anything it hasn’t already been doing. However, it can, for example, justify holding interest rates lower for longer to achieve what’s called maximum sustainable employment (MSE), a theoretical concept.

MSE represents “the highest level of employment we can expect to achieve without seeing inflationary pressures,” Macklem said. The central bank will not set a fixed target for MSE because it’s “not directly observable” and “the precise level is unknown and evolves over time,” according to a BoC research document accompanying the renewal announcement.

“This is not a change to the framework. Rather it is a recognition of existing practice,” Freeland said.

Freeland added that the renewal agreement was about continuity and that it’s not a dual mandate of targeting both low and stable inflation and maximum employment.

Macklem added that it’s about clarity.

“With respect to this idea of actively seeking or probing for maximum sustainable employment, … that’s something to do when inflation is close to target [and] interest rates are at more normal levels. That’s not the situation we’re in right now,” he said.

The ‘Great Resignation’ and Inflation Could Push Each Other Higher, Says Economist

Financial Repression: Are Policy-Makers Really Doing All They Can to Fight Inflation?

The renewal of the inflation-targeting mandate comes at a time when the Canadian economy is dealing with the highest inflation in nearly 20 years. November’s annual inflation matched the 4.7 percent from October. Inflation has been above the bank’s 3 percent upper limit for eight straight months.

“I’m not so sure what the new mandate is bringing in terms of efficiency of monetary policy, because it makes the communication much harder going forward. And as we know, communication is key when it comes to managing inflation expectations,” Lam said.

The Bank of Canada already considers a wide range of economic variables in setting interest rates, but making official the new labour consideration is being seen as a sign that higher inflation could be tolerated for longer if the central bank is not satisfied with improvement in employment.

“They [Freeland and Macklem] really couldn’t address the most direct question of all, which is does this mean, you, the government, are going to accept somewhat elevated inflation, in favour of employment?” Carleton University business professor Ian Lee said in an interview with CTV.

“I think that the core issue and that they never came to terms with is, if it’s working, why change it?”

The central bank undertook consultations with the public regarding its mandate and analyzed a number of alternatives to its flexible inflation-targeting approach, but found no better alternative.

However, it did report that Canadians showed interest in average inflation targeting (AIT)—which the U.S. Federal Reserve recently adopted. The bank said this suggests a desire by Canadians for more flexibility in how it achieves the 2 percent inflation target. With AIT, if inflation is below the 2 percent target for a time, the central bank would let it run above target long enough to achieve an average of 2 percent over the medium term.

The BoC reported that Canadians also indicated some interest in a dual mandate, wanting the bank to consider how it could support the labour market, although many doubted if an employment target would be achievable.

Freeland said she is aiming for more transparency in the BoC’s decisions, and Macklem has spoken about how monetary policy works better when more people understand it.

But Lam says it’s when the central bank’s communications are more clearly understood that it will have more influence on inflation expectations, which play a prominent role in actual inflation. However, it’s more problematic now that the bank has to explain to the public the inflation-fighting mandate along with a view on sustaining maximum employment.

“How are you going to explain that to the general public, when you might have a hard time yourself defining it?”

According to Macklem, “We have been considering a broader range of labour market indicators in trying to assess the overall health of the labour market.” The BoC will now have to explicitly report on how labour market dynamics have affected its monetary policy decisions.

The new agreement also made climate change and inclusion additional considerations for the Bank of Canada.

Lee said he thought Macklem was struggling to deal with a reporter’s question about how the central bank would deal with climate change, inequality, and other social issues.

“How on earth can the central bank deal with what are essentially government fiscal policy issues, inequality,” Lee said.

Lam said other than helping generate sustained economic growth that translates into wage increases, “I don’t see what’s their role in income inequality.”

Climate change is a tough one for central banks, Lam said.

“I don’t think they can directly influence climate change through their policy,” he added.

The BoC will continue to have the flexibility of the 1 to 3 percent range for inflation “to help address the challenges of structurally low interest rates by using a broad set of tools, including sometimes holding its policy interest rate at a low level for longer than usual.”

The reaction in financial markets shortly after the announcement was consistent with one expecting a slower rise in interest rates to fight inflation. The Canadian dollar and yield on the 2-year Government of Canada bond fell slightly.