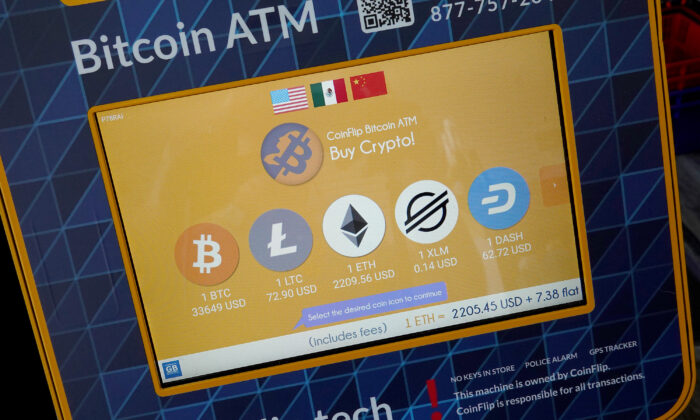 A cryptocurrency ATM is seen here in a Miami convenience store on May 12, 2022. (Joe Raedle/Getty Images)
Cryptocurrency

The United States Department of Justice has announced the seizure of over $1 billion in stolen bitcoin.

The DOJ announced on Nov. 7, that it had earlier seized the stolen bitcoin on Nov. 9 2021, after an unannounced IRS raid on the Gainesville, Ga. home of James Zhong, a 32-year-old investor.

Federal authorities took 50,676 in bitcoin from Zhong’s residence, which was once valued at over $3.36 billion at the time of the theft.

Bitcoin has since lost about two-thirds of its value since it was stolen.

Zhong was charged by federal prosecutors in Manhattan with stealing billions in cryptocurrency from the underground Silk Road online exchange and transferring them into his private accounts in September 2012.

According to the Southern District of New York, Zhong faces a maximum sentence of 20 years in prison after pleading guilty to wire fraud on Nov. 4.

However, he may only face 27 to 33 months in prison under recommended federal guidelines at his Feb. 22, 2023 sentencing in Manhattan U.S. District Court if prosecutors choose not to seek a longer sentence, reported Reuters.

“For almost 10 years, the whereabouts of this massive chunk of missing bitcoin had ballooned into an over $3.3 billion mystery,” said U.S. Attorney Damian Williams in a press statement.

“This case shows that we won’t stop following the money, no matter how expertly hidden, even to a circuit board in the bottom of a popcorn tin,” he added.

A hard drive belonging to Zhong was found in a popcorn tin that was stored in his bathroom closet, which contained some of the stolen Bitcoin, according to IRS special agent Trevor McAleenan in an affidavit.

Prosecutors accused Zhong of stealing bitcoin from the now-defunct Silk Road marketplace on the dark web, where drugs, prostitution, money laundering, and other illegal activities were executed using cryptocurrency.

The Silk Road exchange, which was launched in 2011, was shut down two years later by the FBI.

Its creator, Ross William Ulbricht, is currently serving a life sentence in federal prison for seven counts of enabling illegal drug sales via bitcoin and lost an appeal in 2017.

The IRS Special Agent in Charge Tyler Hatcher said Zhong developed a “sophisticated scheme” to steal the bitcoin from the Silk Road marketplace.

“Once he was successful in his heist, he attempted to hide his spoils through a series of complex transactions which he hoped would be enhanced as he hid behind the mystery of the ‘darknet,” explained Hatcher.

The then 22-year-old Zhong found loopholes in the system and exploited those vulnerabilities to execute the bitcoin hack.

Authorities accused the defendant of creating nine fraudulent accounts on Silk Road in 2012, each with funds between 200 and 2,000 bitcoins.

Zhong then used those accounts to execute over 140 transactions in quick succession, tricking the Silk Road’s withdrawal processing system into releasing the approximately 50,000 bitcoin into his accounts and then moving them into several wallet addresses under his control.

Zhong’s lawyer Michael Bachner released a statement his client returned “virtually” all of the bitcoins that he took ten years ago.

“Mr. Zhong is extremely remorseful for his conduct that occurred over 10 years ago when he was just 22,” said Bachner.

As part of his plea agreement, Zhong also agreed to forfeit his stake in a real estate company, pay a fine of $661,900, along with precious metals in his possession.

According to CNBC, public records show Zhong was the president and CEO of a start-up company called JZ Capital LLC, which was registered in Georgia in 2014.

HisLinkedInprofile (no longer existing) had stated that he was in “investments and venture capital” and that he was a “large early bitcoin investor with extensive knowledge of its inner workings.”

His Facebook page (no longer accessible) showed him on yachts, in front of airplanes, and at high-profile football games.

The DOJ called Zhong’s case the second-largest financial seizure in its history with the largest being the recovery of $3.6 billion in stolen cryptocurrency in February from the 2016 hack of Bitfinex crypto exchange.

Crypto platforms have been repeatedly attacked by cyber criminals who exploit vulnerabilities in their software, despite vast sums being spent on preventing it.

At least $1.9 billion worth of cryptocurrency had been stolen in cyber hacks through July 2022, an increase of the under $1.2 billion stolen in July of the previous year, according to a report by Chainalysis.

Binance, the world’s largest crypto exchange by trading volume, suffered a loss of $570 million worth of cryptocurrency in a hack last month, while another hacker stole $600 million from the decentralized finance platform Ronin Network back in March 2022, reported CNBC.