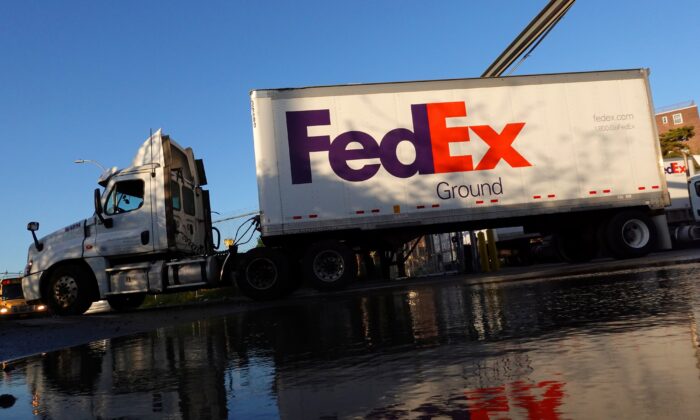 A FedEx delivery truck exits a facility in Brooklyn, New York, on May 9, 2022. (Andrew Kelly/Reuters)
Markets

FedEx Corp.’s shares tracked their worst day on Friday after the delivery heavyweight pulled its forecast, feeding into fears of a global demand slowdown while piling more pressure on its new chief executive for a quick turnaround.

The preliminary results sent the stock tumbling 24 percent to about $155.95, with the company poised to shed about $12.5 billion in market capitalization.

The gloomy outlook comes amid investor anxiety that the U.S. Federal Reserve’s rapid pace of interest rate hikes to tame soaring inflation threatens to tip the economy into a recession.

“We suspect that headwinds from an inflation-fatigued U.S. economy, a resource-constrained European economy, and second-order effects from lockdowns in China proved too much to overcome,” Cowen analyst Helane Becker said.

The U.S. firm joins global logistics peers such as Hong Kong’s Cathay Pacific Airways and France-based transporter CMA CGM in signaling that consumers are saving for essentials such as gas and food ahead of the holiday season as surging prices discourage casual shopping.

Analysts also blamed company-specific problems and missteps over the last few years for the woes, stepping up pressure on CEO Raj Subramaniam, who was appointed to the job in March, to do more to win back investor confidence.

“We have noted high levels of investor skepticism directed at management’s ability to reach its long-term targets. With earnings misses like this, that skepticism seems increasingly warranted,” Credit Suisse analysts said.

The results raise “uncomfortable questions regarding whether the organization may simply be too complex and too unwieldy to be capable of achieving satisfactory financial results over the long-term,” they added.

The Memphis-based company is also dealing with contractor unrest after it misjudged holiday season volume last year. One of its largest contractors, a Tennessee businessman, pressured FedEx last month to boost compensation. FedEx later cut ties and sued him.

FedEx on Friday declined to comment beyond the press release on its preliminary results.

Subramaniam warned on CNBC on Thursday that he believes a global downturn was impending.

In response to a question of whether the economy is “going into a worldwide recession,” Subramaniam said “I think so. But you know, these numbers, they don’t portend very well.”

The stock’s drop on Friday, if losses hold, will surpass its previous steepest one-day percentage decline of 16.4 percent on Black Monday in 1987.