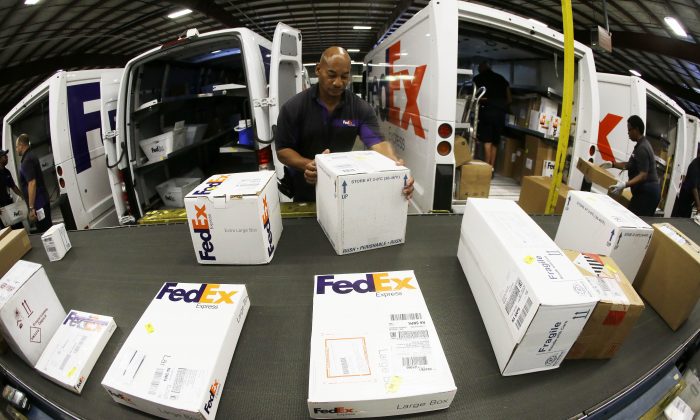 FedEx shares dipped in early trading Wednesday after the package-delivery giant reported quarterly results that were below expectations and gave a mildly disappointing outlook for the next fiscal year.

FedEx also announced an increase in the mandatory retirement age for board members, from 72 to 75. That could allow Chairman and CEO Fred Smith to stay on the job longer — he will turn 71 in August.

FedEx Corp. reported a loss of $895 million, or $3.16 per share, in the quarter ended May 31, as results were dragged down by a change in accounting for pension costs.

The company said it would have earned $2.66 per share excluding the pension change, a write-down of aircraft and other non-repeating items. That still missed a forecast of $2.70 per share from a survey of analysts by Zacks and $2.68 per share from a FactSet survey.

Revenue was $12.11 billion, missing the $12.39 billion estimate from Zacks and $12.30 billion from FactSet. Revenue dipped 4 percent at the company’s biggest business segment, FedEx Express, due to lower fuel surcharges and the stronger dollar.

The results closed out the Memphis, Tennessee-based company’s fiscal year. For the year ending in May 2016, FedEx said it expects adjusted earnings between $10.60 and $11.10 per share. The midpoint, $10.85, is slightly below the $10.89 forecast from analysts surveyed by FactSet.

FedEx said last week that it would take a $2.2 billion pretax charge in the May 31 quarter because it was changing pension accounting to record plan gains and losses in the fourth quarter of each fiscal year instead of spreading them over many years. The company said the change would make its results easier to understand.