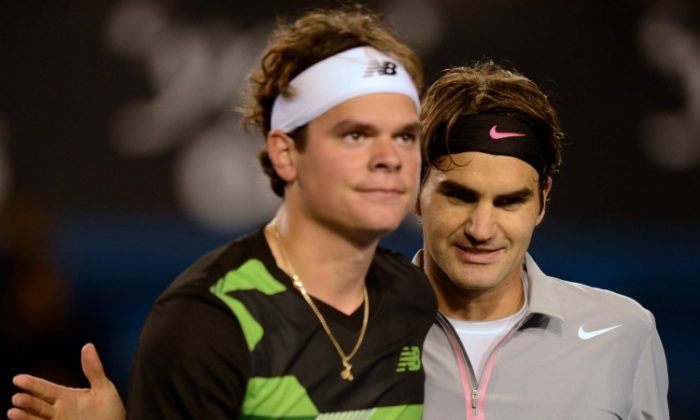 Milos Raonic (L) and Roger Federer meet at the end of the fourth round match at the Australian Open on Monday. Federer advanced to the quarterfinals. (Greg Wood/AFP/Getty Images)
Sports

Federer Too Strong for Raonic at Australian Open

Roger Federer was flawless in dismissing Canada’s Milos Raonic in the fourth round of the Australian Open on Monday night in Melbourne. Federer dismissed the 15th-ranked Raonic in straight sets 6–4, 7–6, 6–2, never facing a break point.

Raonic, 22, only won 15 percent of points on the Federer serve. Federer only made 12 unforced errors. It was the fourth meeting between the two—the three other matches were all played last year with Federer winning on three different surfaces.

“It was a tough match last night. Roger was… Roger,” Raonic tweeted several hours after the match. Indeed, Federer looked to be at his best as he has demolished the competition through four rounds.

For Raonic, it was a similar loss to the one he suffered at the hands of eventual US Open champion Andy Murray last year in the fourth round in New York. Raonic was thoroughly outclassed, losing 6–4, 6–4, 6–2.

In that match, Raonic was never able to earn a break point and only won 22 percent of points off the Murray serve. Murray also only committed 12 unforced errors.

But, for Raonic, the positive is that he’s reached the fourth round of two straight grand slams. After dropping the first set in his opening round match, he won nine straight sets to set up the match with Federer.

With slightly faster courts at the Australian Open this year, the match between Federer and Raonic turned into a battle of servers, with rallies kept to a minimum. Raonic’s massive serve kept Federer off balance for the better part of two sets.

But as good as Raonic was serving, his return game was exposed and he was not able to get into a suitable rhythm in rallies.

After Federer won the first set, Raonic pushed the Swiss master to a tiebreak in the second set. Raonic’s ground game let him down as he lost both points on serve mid-way through the tiebreak.

Raonic hit a poor approach shot and was easily passed by Federer and, on the next point, he pulled a backhand wide.

Federer broke Raonic at love to open the third set before racing to victory.

Raonic blasted 19 aces to Federer’s 14, but it was his return of service that let him down. And, he was always going to be at a disadvantage in extended rallies against the No. 2 player in the world.

But last year, Raonic had a strong finish after the US Open including a win over Andy Murray in Japan before losing in the final. With Raonic pushing toward the top 10, he can probably expect to meet Federer again in a big tournament.

“I look forward to the next challenge vs Spain in DC!” Raonic tweeted in reference to Canada’s upcoming Davis Cup match against the dominant Spaniards Feb. 1-3 in Vancouver.