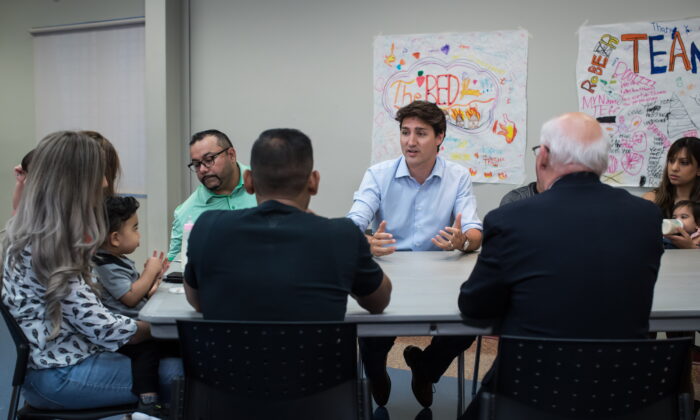 Prime Minister Justin Trudeau sits down to speak with families about the Canada Child Benefit during a visit to the Surrey Sport and Leisure Complex, in Surrey, B.C., on July 13, 2019. (The Canadian Press/Darryl Dyck)
Canada

Federal spending on benefits for eligible families with children through the Canada Child Benefit (CCB) increased by 68.5 percent in five years and was financed entirely by borrowing, says a new essay from the Fraser Institute public policy think tank.

The essay looked at the fiscal years from 2014/15 to 2019/20 to examine the extent to which current versus future taxes are being used to finance the expanded CCB.

In 2014/15, the federal government, then under Stephen Harper’s Conservatives, increased the coverage and benefits for two programs providing support to families with children. In 2015, the Trudeau government eliminated the existing programs and created the CCB, which dramatically increased the spending on the program. The benefits were also increased for most families, particularly those with middle-income.

Since the increased spending for the CCB is financed through borrowing, the costs will fall on future generations, the authors note.

“Today, parents receive cash transfers from Ottawa that the next generation, namely their own children, will pay for in the future,” said Jason Clemens, executive vice president of the Fraser Institute.

The CCB also increased the benefits received for families with a gross income of up to $180,000.

“The CCB cannot be credibly referred to as a targeted program and it transfers relatively more to the middle class than did the previous child benefits system,” said the report.

“The transition to deficits (borrowing) cannot be explained by lower revenues during the 2016-17 to 2019-20 period. The revenues collected during this period are almost exactly the same as in Budget 2015: $1.274 trillion versus $1.281 trillion,” says the essay.

The Canada child benefit (CCB) is administered by the Canada Revenue Agency (CRA). It is a tax-free monthly payment made to eligible families to help with the cost of raising children under 18 years of age.