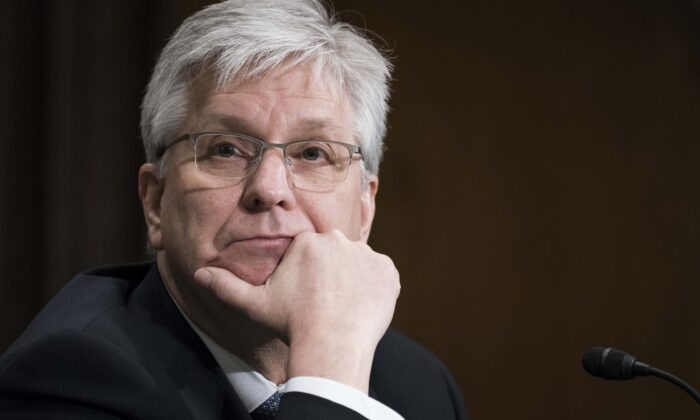 Christopher Waller testifies before the Senate Banking, Housing, and Urban Affairs Committee during a hearing on his nomination to be member-designate on the Federal Reserve Board of Governors, in Washington, on Feb. 13, 2020. (Sarah Silbiger/Getty Images)
Economic Policies

“If the data comes in as I expect, I will support a similar-sized move at our July meeting,” Waller told a Society for Computational Economics conference in Dallas. “The Fed is ‘all in’ on re-establishing price stability.”

A surge in inflation, which is at its highest level in 40 years, has made hawks of nearly all Fed policymakers, only one of whom dissented earlier this week against what was the central bank’s biggest rate increase in more than a quarter of a century.

Policymakers currently expect to raise the Fed’s benchmark overnight interest rate, now in a range of 1.50 percent to 1.75 percent, to at least 3.4 percent in the next six months. A year ago, the majority thought the rate would need to stay near zero until 2023.

On Friday, the Fed called its fight against inflation “unconditional,” and Atlanta Fed President Raphael Bostic, who had been its most dovish policymaker, declared “we’ll do whatever it takes” to bring inflation back down to the central bank’s 2 percent target.

Inflation, as measured by the Personal Consumption Expenditures Price Index, is running at more than three times that level.

“That’s the most important thing I’m worried about,” Waller said on Saturday, adding that moving rates quickly up to the neutral level and into restrictive territory is necessary to slow demand and put a check on inflation.

That monetary tightening will likely drive unemployment, now at 3.6 percent, to between 4 percent and 4.25 percent, or possibly higher, Waller said, “but my goal is just to slow the economy.” Rising worries that Fed rate hikes will cause a recession, he said, “are a bit overblown.”

Waller also said there are limits to how fast the Fed can move: markets would have a “heart attack” if the central bank raised rates by a full percentage point in a single move.

Speaking at the same event in Dallas, former Fed Vice Chair Donald Kohn blamed high inflation in part on a decision to delay the tightening of policy that he traced to a framework the U.S. central bank adopted in 2020. That framework ruled out raising rates to preempt inflation triggered by falling unemployment.

Waller, however, argued that it was the Fed’s overly specific promises about when it would end its massive asset purchases, implemented in 2020 to shelter the economy from pandemic-related fallout, that were at fault.

Structural changes to the economy mean there is a “decent chance” the Fed will in the future need to again slash its policy rate to zero and buy bonds to fight even a typical recession, he said.

Waller said, next time, he would support less restrictive promises around the end of bond purchases and more clarity around not just when the Fed would start to tighten policy but also how fast. If the Fed says it will not start raising rates until the labor market is at full employment, as it did in the recent cycle, markets should be primed to understand that borrowing costs will be pushed up very quickly once rates start to rise.

Kohn, for his part, urged some caution once rates are high enough to start slowing inflation, warning that the Fed risks overshooting on its goals.

“It requires judgment and confidence to know when to back off,” Kohn said.