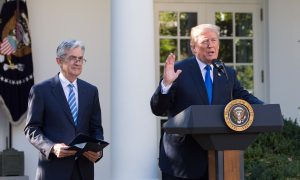 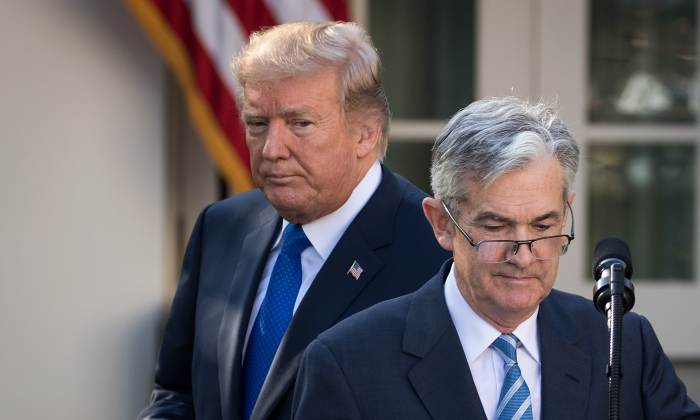 President Donald Trump looks on as his nominee for the chairman of the Federal Reserve Jerome Powell takes to the podium during a press event in the Rose Garden at the White House, Nov. 2, 2017. (Drew Angerer/Getty Images)
US

Federal Reserve Chairman Jerome Powell believes President Donald Trump doesn’t have the legal authority to fire him and intends to serve out the rest of his four-year term.

In an interview with “60 Minutes” aired on March 10, host Scott Pelley asked Powell if the president can fire the chair of the Federal Reserve.

“Well, the law is clear that I have a four-year term. And I fully intend to serve it,” Powell responded.

Last year, Trump repeatedly criticized the central bank for raising interest rates, raising the possibility that he may fire Powell, his appointee. The question was settled when Trump’s chief economic adviser said on Dec. 26 that Powell’s job is “100 percent safe.”

The law is not clear on whether or not the president can remove the chairman of the central bank. Trump appointed Powell in late 2017. Powell has raised rates five times since, drawing increasingly fiery criticism from Trump. In December 2018, the president wrote on Twitter that the Federal Reserve is the “only problem” for the American economy. In November 2018, he told The Wall Street Journal that the central bank “is a much bigger problem than China.”

The only problem our economy has is the Fed. They don’t have a feel for the Market, they don’t understand necessary Trade Wars or Strong Dollars or even Democrat Shutdowns over Borders. The Fed is like a powerful golfer who can’t score because he has no touch – he can’t putt!

When presented with one of the president’s criticisms, Powell declined to comment and reasserted the Fed’s independence.

“My duty is one that Congress has given us, which is to use our tools to achieve maximum employment and stable prices and to supervise and regulate banks so that they treat their customers fairly and so that they’re strong, well-capitalized, and can perform their critical function in good times and bad,” Powell said. “That’s my job.”

The central bank didn’t raise interest rates in January this year for this first time during Powell’s tenure. The Fed kept interest rates at an all-time low throughout the eight years of Barack Obama’s presidency.

“We are directed to take, to execute policy, in a strictly nonpolitical way, serving all Americans and that’s what we do. We are independent in that sense. Our decisions on rates can’t be reversed by any other part of government,” Powell said.

The central bank is the sole vehicle for creating money in the United States, with much of the supply created via unbacked bank loans, similar to creating money out of nothing.

Congress also tasked the Federal Reserve to keep inflation steady and prevent financial crises, but the bank’s policies have nevertheless repeatedly led to and amplified the crises it was created to prevent.

Shortly before announcing his presidential bid in 2015, Trump suggested that moving back to the gold standard “would be wonderful,” but hard to do because the United States no longer has the gold needed. Under a gold-standard banking system, every dollar is backed by gold held by the government.

“We used to have a very very solid country because it was based on the gold standard,” Trump told WMUR on March 27, 2015. “We don’t have that anymore.”