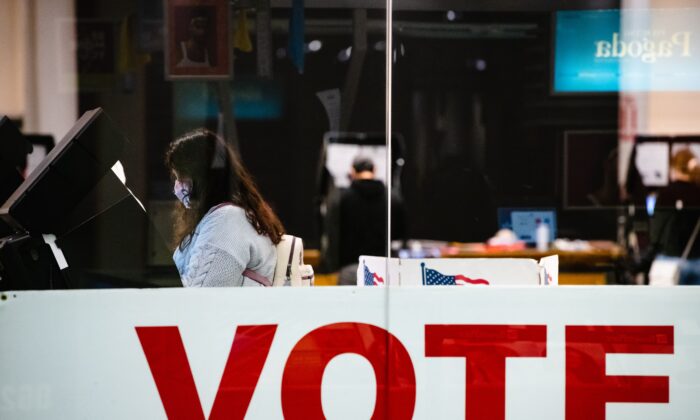 A woman casts her ballot in the 2020 general election inside the Basset Place Mall in El Paso, Texas on Nov. 3, 2020. (Justin Hamel/AFP via Getty Images)
Judiciary

A federal court struck down two Texas state laws that forced voters to refrain from wearing clothing with political messages on them in or near polling places as unconstitutional infringements of free speech.

According to Pacific Legal Foundation (PLF), a national public interest law firm based in Sacramento, California, that represented plaintiff Jillian Ostrewich, the laws gave thousands of election workers across the state unlimited discretion to confront any voter wearing a T-shirt, hat, or button related to any past, present, or future candidate, political party, or ballot measure.

Ostrewich, the wife of a firefighter, wore a yellow T-shirt bearing the words “Houston Firefighters” and a small AFL–CIO emblem to a polling place in Houston in October 2018. There was an initiative on the ballot at the time to give firefighters a pay increase. The ballot question, known as Proposition B, was approved by voters 59.2 percent to 40.8 percent in November 2018, Ballotpedia reports.

Election officials ordered Ostrewich to turn her shirt inside out or be barred from casting her ballot. Officials also ordered other voters not to wear shirts bearing the firefighters’ union logo. Firefighters wearing their uniforms to the polls were reportedly admonished by officials.

But the prohibition, Edison noted, is “not limited to candidates, measures, or political parties appearing on the ballot,” and the provisions suggest that election judges are allowed to ban voters from wearing apparel they deem “political.”

“This is problematic,” he wrote.

Like the Minnesota statute at issue in the Supreme Court’s 2018 ruling in Minnesota Voters Alliance v. Mansky, “sections 61.003 and 85.036’s use of the term ‘political’ is unmoored from any objective, workable standard that an election judge could use to reasonably apply the statute,” wrote Edison.

The sections “do not give Texas voters notice of what is expected of them in the polling place, and they do not provide election judges with objective, workable standards to reign in their discretion. This is impermissible under the First Amendment and these statutory provisions should be struck down as unconstitutional.”

Hanks adopted Edison’s recommendations in full, holding that “sections 61.003 and 85.036 are struck down as unconstitutional infringements on the First Amendment right to free speech.”

A magistrate judge helps district court judges handle what at times can be a heavy workload.

Lawyer Fa told The Epoch Times that “what this lawsuit shows is that when you have broad and vague laws, people who are working them are bound to interpret them in different and inconsistent and arbitrary ways. And what we were able to accomplish in this lawsuit was not just a victory for free speech, but also a victory for the application of objective standards in the law. So I think it’s a great victory on both of those fronts.”

Ostrewich said in a statement that she was pleased with the court’s opinion.

“It is just a T-shirt. The government should have no business dictating what I wear when I go to vote.”

One plaintiff dropped out of the lawsuit on July 10, 2020, according to court records.

That litigant was Anthony Ortiz, who wore a “Make America Great Again” hat when he went to vote in a polling precinct in November 2018, but was forced to remove it or face a misdemeanor charge. Ortiz said an election official instructed him to turn his hat inside out, or else he would be prevented from voting. Ortiz objected, noting that his hat didn’t identify a party or candidate on the current ballot. Ortiz eventually left the polling station and returned later without the hat and was allowed to vote, as The Epoch Times previously reported.

It’s unclear if Texas will appeal the court ruling.

The lead attorney for the state, Christopher D. Hilton of the Texas Office of the Attorney General, didn’t immediately respond to a request for comment.