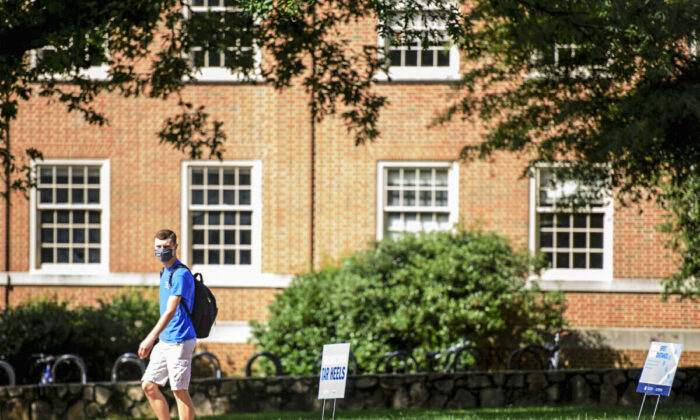 A student walks through the campus of the University of North Carolina at Chapel Hill in Chapel Hill, N.C., on Aug. 18, 2020. (Melissa Sue Gerrits/Getty Images)
Education & Family

The plaintiff, a group called Students for Fair Admissions (SFFA), initiated the lawsuit against the university in November 2014, alleging that its undergraduate admissions process violates multiple rights, including equal protection under the law.

Specifically, SFFA alleges that the university had “intentionally discriminated against certain of its members on the basis of their race, color, or ethnicity,” and had been utilizing an undergraduate admissions policy that “does not merely use race as a ‘plus’ factor in admissions decisions in order to achieve student body diversity,” rather it “uses race as a factor in admissions.”

But UNC argued that their admissions process was “constitutionally permissible” in that it “withstands strict scrutiny,” arguing that “the University’s compelling interest in the educational benefits that flow from a diverse student body” is clear and uncontested.

Defendants said that the university takes an “individualized, holistic review” of each application for admission and considers race flexibly “as only one factor” while evaluating students. The university also argued that it has demonstrated a “serious, good-faith consideration of race-neutral alternatives” but has “found none that would allow it to achieve its compelling interest about as well and at tolerable administrative expense.”

Read More
Author Kenny Xu on Race Equality Targets: ‘Nobody Is Saying We Want 6 Percent Asians in the NBA’

U.S. District Judge Loretta Biggs in Winston-Salem on Monday ruled that the university’s admissions process did not discriminate against white and Asian American applicants, noting that while the institute still “continues to have much work to do” in its effort to improve diversity and inclusion, it had been consistent with Supreme Court guidance regarding the consideration of race in admissions.

“While no student can or should be admitted to this university, or any other, based solely on race, because race is so interwoven in every aspect of the lived experience of minority students, to ignore it, reduce its importance and measure it only by statistical models as SFFA has done, misses important context to include obscuring racial barriers and obstacles that have been faced, overcome and are yet to be overcome,” Biggs said in a 161-page ruling (pdf) on Monday.

Biggs noted that 70 years after the first black students were admitted to UNC, “the minority students at the university still report being confronted with racial epithets, as well as feeling isolated, ostracized, stereotyped, and viewed as tokens.”

While the judge noted that the university has made numerous efforts to consider race-neutral alternatives, such as boosting financial aid to students of low income families, increasing diversity through accepting more transfer students, and changing the admissions evaluation process, it still had a long way to go.

“As a whole, underrepresented minorities are admitted at lower rates than their white and Asian American counterparts,” she wrote.

“The university is far from creating the diverse environment described in its Mission Statement and other foundational documents submitted into evidence in this case,” Biggs said.

“This decision makes clear that the university’s holistic admissions approach is lawful,” University of North Carolina spokesperson Beth Keith told The New York Times in response to the ruling. “We evaluate each student in a deliberate and thoughtful way, appreciating individual strengths, talents, and contributions to a vibrant campus community where students from all backgrounds can excel and thrive.”

SFFA is currently appealing to the Supreme Court in a similar lawsuit against Harvard University’s “race conscious” admissions policies. A federal appeals court ruled in November last year that the university’s admissions process did not violate civil rights law.