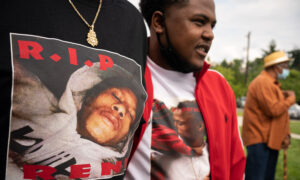 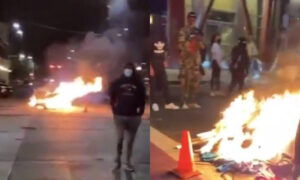 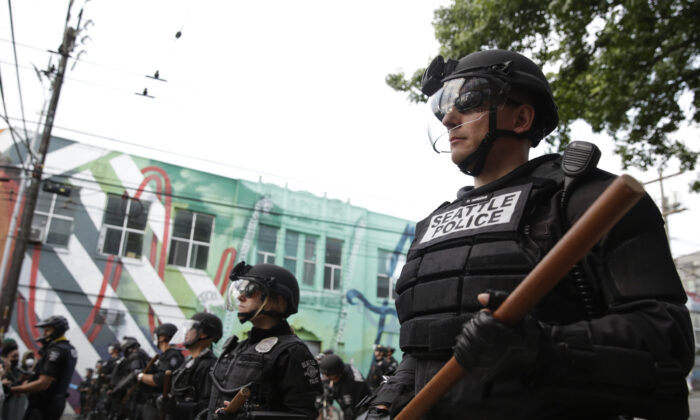 Seattle police officers stand guard outside a precinct as people protest the death of George Floyd, in the Capitol Hill neighborhood of Seattle, Wash. on June 1, 2020. (Jason Redmond/AFP via Getty Images)
US News

A federal judge late Friday blocked a Seattle law that banned the police from using crowd control measures as the city prepared for violence.

Seattle’s City Council unanimously passed an ordinance last month prohibiting any city department from owning, purchasing, renting, storing, or using “crowd control weapons” such as “chemical irritants, ultrasonic cannons … or any other device” to cause pain or discomfort.

Public safety will not increase as a result of the ordinance, U.S. District Judge James Robart said in his ruling.

The city is expecting “significant and potentially dangerous protests this week,” giving officers no time to train for how to control crowds with the limitations from the law, the judge said. That would likely result in “officer confusion.”

“The court concludes that such officer confusion presents risks to both the officers’ and the public’s safety,” he wrote.

The block is only temporary while the federal government, which currently oversees the Seattle Police Department, reviews the ordinance and information from Seattle Police Chief Carmen Best.

The Department of Justice sought the injunction against the ordinance, in accordance with both Best and Mayor Jenny Durkan, a Democrat.

In a statement early Saturday, Durkan said she believes changes do need to be made to how Seattle police officers manage crowds, and noted her prior support for a ban on tear gas. But she declined to sign the ordinance, appealing to the court instead, because she thought it could conflict with requirements under a consent decree the city is party to along with the federal government.

Mike Solan, president of the Seattle Police Officers Guild, said the ruling showed that there may still be hope for the “ignored majority” of the city.

“No longer should our city be held hostage by anarchists committing crimes and injuring dozens of [union] members. Good will always WIN over evil,” he said on Twitter.

City council members had not responded to the ruling as of Saturday morning. All Seattle City Council members are Democrats, except for one socialist.

Best, the police chief, warned the council before the ordinance was blocked that some events planned for this weekend would likely involve “many of the same violent actors” that participated in rioting in the city this week.

“There is no reason not to assume we will continue to experience property destruction, arson, looting, and attempts to injure additional officers throughout the weekend and beyond,” Best wrote.

Seattle police officers, under the ordinance, would not be able to manage demonstrations, she added. Even if crowds grew violent, police might not respond.

Organizers are planning dozens of protests across the nation on Saturday “for the abolition of police,” according to a social media post. They’re telling people to gather in the Capitol Hill neighborhood on Saturday at 1 p.m. Pacific Time. The event is called “Youth Day of Action Seattle (+PDX solidarity march).” The local organizers are the PNW Youth Liberation Front Seattle, an affiliate of the national PNW Youth Liberation organization.

The group describes itself as being against capitalism and fascism. Antifa, another group that says it is anti-fascist, is known for openly espousing violence. PNW shared tactical advice on Friday, including guidance on formations during gatherings, using language similar to that used by Antifa. And it recently called for violence against people waving American flags.

At a press conference on Friday morning, city officials urged protesters not to become violent.

“I ask everyone who’s protesting this weekend to please do it peacefully. Please make sure you raise your voices and challenge government, but do it lawfully,” Durkan said, though she admitted the events usually “draw some limited individuals bent on causing destruction.”

A limited number of federal officers were sent to the city this week, as part of a deployment to a number of areas in response to spikes in violence.

U.S. Attorney Brian Moran said federal agents “are here to protect federal properties and the important work that occurs in our courthouses and federal buildings,” noting that rioters broke into the Nakamura Federal Courthouse earlier this month.

Durkan said city officials are “prepared to pursue every legal recourse” if federal forces “intervene like they have in Portland,” where rioters have repeatedly assaulted a U.S. courthouse.

“President Trump’s deployment of federal agents to Seattle is dangerous political theater designed to intimidate and harm Americans exercising their constitutional right to protest,” they said in a joint statement.

Video footage from Seattle showed a number of businesses being boarded up in preparation for the potential violence. The Seattle Police Department’s East Precinct, which sits in Capitol Hill, was also boarded up and fenced off.