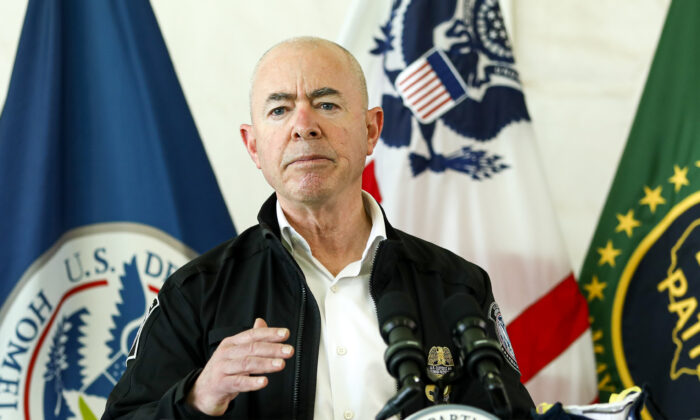 An Ohio federal judge partially blocked the Biden administration’s mandate to limit the scope of deportation to certain groups of immigrants, thereby siding with the three Republican-led states of Ohio, Montana, and Arizona that had mounted the legal challenge against the mandate.

In September 2021, the Secretary of the Department of Homeland Security (DHS), Alejandro Mayorkas, had issued a memo to the Immigration and Customs Enforcement (ICE), asking its officers to narrow their focus on arresting immigrants who pose a threat to public safety or national security as well as immigrants who illegally crossed the American border recently. This contradicted the policies under the Trump administration which allowed ICE officers a broader latitude when it came to arresting and deporting illegal immigrants.

In his ruling, Judge Michael Newman sided with the three states which argued that such directives should come only from Congress and not the executive.

By issuing a nationwide injunction, Newman prohibited federal agents from making “custody decisions” based on the September 2021 DHS memo. He also banned using the memo for releasing or delaying the deportation of immigrants who have received final orders of deportation.

“The States sue because they believe DHS skirted Congress’s immigration enforcement mandates when it issued a policy that prioritizes certain high-risk noncitizens for apprehension and removal. DHS contends that seemingly mandatory statutes must be read flexibly to permit efficient law enforcement,” the ruling stated.

“At bottom, that is what this dispute is about: can the Executive displace clear congressional command in the name of resource allocation and enforcement goals? Here, the answer is no.”

While issuing the memo in September, Mayorkas had argued that the sole fact of someone being a removable noncitizen should not be the only basis of an enforcement charge against them.

However, Judge Newman pointed out that certain laws impose a “mandatory duty” on DHS to detain “certain noncitizens” and deport them. The memo “neglects these commands and arbitrarily disregards the harms of nonenforcement,” the ruling said.

Republican officials welcomed the court decision. The ruling is a victory for those who want the executive branch to be the one enforcing laws, Ohio Attorney General Dave Yost, said in an interview with The Washington Post, while adding that the court decision makes it clear that ICE does not have the authority to release immigrants who Congress already decided must be deported.

“VICTORY: A federal judge just blocked the lawless Biden Administration policy that halted nearly all deportations after our office challenged this guidance. Our office has been at the forefront of the fights for the rule of law this past year. Arizona deserves nothing less,” Mark Brnovich, the Attorney General of Arizona, said in a tweet on March 22.