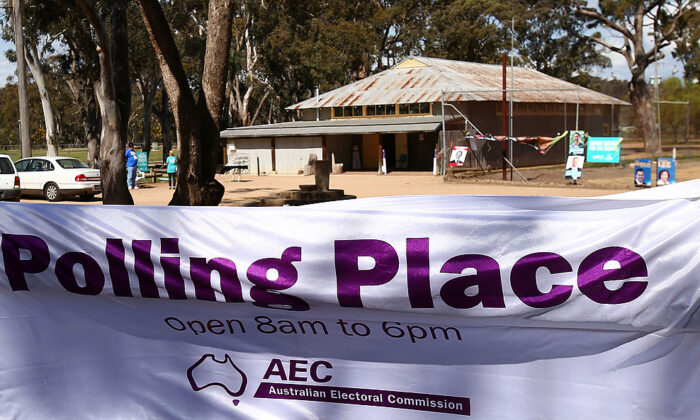 A general view of a polling booth in the electorate of Fraser on election day in Hall, Australia on September 7, 2013. (Photo by Mark Nolan/Getty Images)
Australia

The Australian Electoral Commission (AEC) announced on Thursday afternoon that people are coming forward to fill positions in areas where federal election staff shortages were identified on Wednesday.

Electoral Commissioner Tom Rogers said in a release on Thursday that over the past 24 hours, 5,000 new staff had signed up to fill the void in areas of concern on polling day, Saturday, May 21.

“The new registrations mean some of the locations we identified yesterday are no longer of critical concern, but others are still falling short, and given the current environment, there could be new areas of concern arise,” he said.

“However, the impact will be limited. We will have the absolute vast majority of the 7,000 polling places we operate across the nation on election day open and operating as per usual.”

This comes after the AEC’s alert to voters on Wednesday that in certain areas, recruitment difficulties may result in a small number of planned polling places being unable to open on Saturday, particularly in certain parts of Queensland, South Australia, and Western Australia.

Rogers said that electoral staff had made over a million phone calls, sent more than half a million emails, and had 1.8 million unique page views on their jobs webpages since February, adding that there was not much more they could have done so far.

“We’re calling on other organisations to assist as a final push and investigating all possible staffing models, including amalgamating venues,” he had said.

“We’re also continuing to engage with local residents in the hope they’ll put their hand up. For some people, it may mean that if you want to vote at a polling place in your town on election day, you may have to sign up to work as well.”

With these efforts, the election day staff void is being filled, and many voters are also taking advantage of other voting options, thus taking some pressure off the polling places.

“As it stands on Thursday afternoon, we’ve already seen more than four million people cast a pre-poll vote with 2.68 million people apply for a postal vote before the deadline,” Rogers said.

“People are taking advantage of the options the Australian election system makes available—pre-poll, postal, remote mobile votes, couriered overseas votes, in-person overseas votes, and even telephone voting are all being utilised by those eligible to do so.

“For those areas of concern, people are putting their hand up to help deliver democracy in their community, which is great, but we need more,” he said.

Meanwhile, people who tested positive for COVID-19 after 6 p.m. on Tuesday are eligible to vote by phone but must have registered their RAT or PCR result prior to registering for a telephone vote.

Those who tested positive between Saturday and 6 p.m. Tuesday had the option of applying for a postal vote up until the application deadline of 6 p.m. Wednesday.