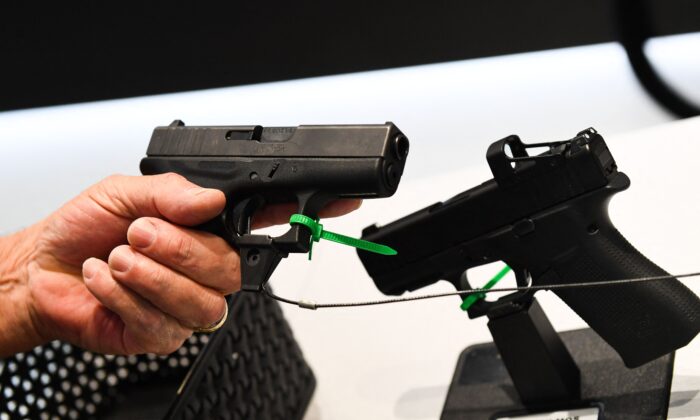 A federal judge has struck down a Texas law preventing individuals aged 18 to 20 years from carrying handguns in public, in the first major court ruling on Second Amendment rights since the Supreme Court recognized a constitutional right to carry firearms in public for self-defense.

Previously, the U.S. Court of Appeals for the 5th Circuit upheld the state law, but that was before the Supreme Court issued its landmark ruling.

The Supreme Court voted 6–3 on June 23 in New York State Rifle and Pistol Association v. Bruen to strike down New York state’s tough concealed-carry gun permitting system on constitutional grounds. At the same time, the court found that laws preventing law-abiding individuals from carrying firearms in public for self-defense cannot be upheld unless they are consistent with the nation’s historical firearm regulation traditions.

Before the ruling, laws in New York and seven other states required applicants to demonstrate “proper cause” in order to obtain a license to carry a concealed handgun in public. But the high court’s ruling declared that New York’s proper-cause requirement—and by extension, the laws of the other seven states—violated the 14th Amendment by preventing law-abiding citizens with ordinary self-defense needs from exercising their Second Amendment right to keep and bear arms in public for self-defense.

Some states like Maryland rescinded their proper cause requirement but other blue states have been slow to comply or have resisted the decision outright. Since the ruling, civil rights activists have filed several lawsuits aimed at reining in gun restrictions they argue are not consistent with Bruen.

On Aug. 25, in a lawsuit filed in November of last year, Judge Mark Pittman of the U.S. District Court in Fort Worth, Texas, ruled that the Texas law violates the Bruen precedent. Texas officials had argued that historical analogs justify the law.

“The issue is whether prohibiting law-abiding 18-to-20-year-olds from carrying a handgun in public for self-defense is consistent with this Nation’s historical tradition of firearm regulation,” Pittman, a Trump appointee, wrote in his opinion (pdf) in Firearms Policy Coalition Inc. v. McCraw, court file 4:21-cv-1245.

“Based on the Second Amendment’s text, as informed by Founding-Era history and tradition, the Court concludes that the Second Amendment protects against this prohibition. Texas’s statutory scheme must therefore be enjoined to the extent that law-abiding 18-to-20-year-olds are prohibited from applying for a license to carry a handgun.”

Pittman stayed his ruling for 30 days to give Texas an opportunity to appeal.

“Texas cannot point to a single Founding Era law that prohibited 18-to-20-year-olds from carrying a functional firearm for self-defense, because not only did no such law exist, but those individuals are an important reason why we have a Bill of Rights in the first place,” FPC senior attorney Cody Wisniewski said in a statement.

“The typical age of individuals that went to war with the British for our Independence was between 17 and 20 years old. And young people have just as much a right to keep and bear arms in public as adults over the age of 21,” the attorney said.

“This decision is a significant victory for the rights of young adults in Texas and demonstrates for the rest of the nation that similar bans cannot withstand constitutional challenges grounded in history.”

The FPC said it is also pursuing lawsuits seeking to restore the right of young adults to carry firearms in California, Georgia, Illinois, Minnesota, Pennsylvania, and Tennessee.

The Epoch Times reached out for comment to Texas Attorney General Ken Paxton, a Republican, but had not received a reply as of press time.