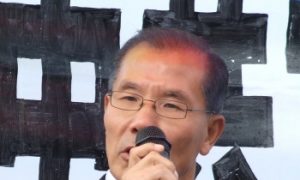 By Andrea Hayley
Print
WASHINGTON—While Republican Paul Ryan and President Obama face off in the budget debate, another proposal, introduced by 76 democratic congresspeople, offers a hard-to-ignore solution that lowers the debt faster than the others, and has traction with the public. It is called the People’s Budget.

“Just when it seemed that all of Washington had lost its values and its connection with the American people, a bolt of hope has arrived,” wrote leading economist and adviser to Columbia University’s Earth Institute, Dr. Jeffrey Sachs, in a Huffington Post editorial.

“In one opinion survey after the next, the public says that the rich and the corporations should pay more taxes,” wrote Sachs.

Introduced by the Congressional Progressives Caucus (CPC), the People’s Budget significantly raises taxes on the wealthiest Americans and corporations.

“This is an enormous amount of tax increase,” said Douglas Holtz-Eakin, president of the right-leaning American Action Forum, and a former director of the nonpartisan Congressional Budget Office (CBO).

The budget also ends America’s involvement in the wars in Iraq and Afghanistan after 2012, and further reduces the size and strength of U.S. forces.

Part of the increased revenues collected according to the CPC plan would be used to support a total of $1.7 trillion worth of new investments in education, affordable housing, clean energy, and infrastructure over the next 10 years.

This kind of spending is about making public investments for future generations. The alternative is less monetary debt, but a lower stock of capital, said Ethan Pollack, senior policy analyst, with the Economic Policy Institute.

“Budgets are more than collections of numbers; they are a statement of our values,” wrote the authors of the People’s Budget.

The Congressional Progressives represent the largest caucus in Congress, consisting of 75 House Representatives and one senator.

Caucus co-chairs Keith Ellison (D-Minn) and Raúl Grijalva (D-Ariz.) commissioned the Economic Policy Institute to conduct independent verification of their proposals, which most economists find credible, even if they do not agree with the policy approach.

Since its introduction in mid-April, the proposal has been endorsed by Princeton Economist and New York Times editorial writer, Paul Krugman. Articles have been published in the Economist, The Nation, and the Washington Post supporting the CPC approach.

The People’s Budget reduces deficits by $5.7 trillion in the next 10 years, produces a budget surplus, and results in a debt ratio that is less than 65 percent of GDP by 2021.

Holtz-Eakin said it is more aggressive within the first 10 years than either House Budget Chairman Paul Ryan’s Path to Prosperity or President Obama’s Fiscal Year 2012 budget request. But the CPC approach is not going to solve our growth and budget problems, he said, because entitlements must be brought in check for a lasting solution.

“There is simply no way that this strategy is going to work over the long haul,” he said.

“This is unambiguously negative. I think you could kiss the recovery goodbye,” said Holtz-Eakin.

Apart from higher taxes on the wealthiest Americans, the People’s Budget also raises payroll taxes, which fund Medicare and Social Security. Workers making between $106,800 and $170,000 will have to pay more, phased in over a five-year period. Employers will need to pay their share immediately.

A number of minor health care changes proposed by CPC follow the president’s approach of strengthening efficiencies within the system. They are also suggesting a controversial public option for health insurance that would begin in 2014, as a way for the government to take advantage of economies of scale to extract leverage over health care suppliers.

Currently, anyone making more than $379,150 a year pays the top rate of 35 percent. The new rates would range from 45 to 49 percent. Married couples making over $1 million dollars a year would pay 45 percent, while individuals earning higher than $1 billion would pay 49 percent.

They would also end the Bush tax cuts for everyone at the end of 2012, while continuing to support marriage relief, credits, and incentives for children, families, and education. Itemized deductions on tax filings, which tend to support those with higher earnings, would also be pared down.

They would also enact a progressive estate tax, leaving 99.75 percent of all inheritances free of taxation, but offering a series of marginal tax rates from 45 to 65 percent within that one-quarter of a percent.

Finally, a preferential 15 percent rate on investment income would be removed, and made to match the earned income rate. This would remove the ability of Americans with more wealth to shift their form of compensation to capital gains to avoid paying taxes.

Holtz-Eakin characterized the program as an “across-the-board” tax increase.

The contrast is clear when compared to Ryan’s plan, which leans heavily on spending cuts and tax cuts, and Obama’s budget, which falls somewhere in the middle.

Pollack points out that polling data shows that the majority of Americans are opposed to nearly every deficit reduction measure except higher taxes on the higher income earners.

He said the People’s Budget is redefining the “true left pole” of the current budget debate.

“The reason why the CPC budget has been taken more seriously is specifically because it reduces deficits below what some of the others would,” Pollack said.

It is more important that a plan be judged on its composition, on what it does to the middle class and to working families, he added.